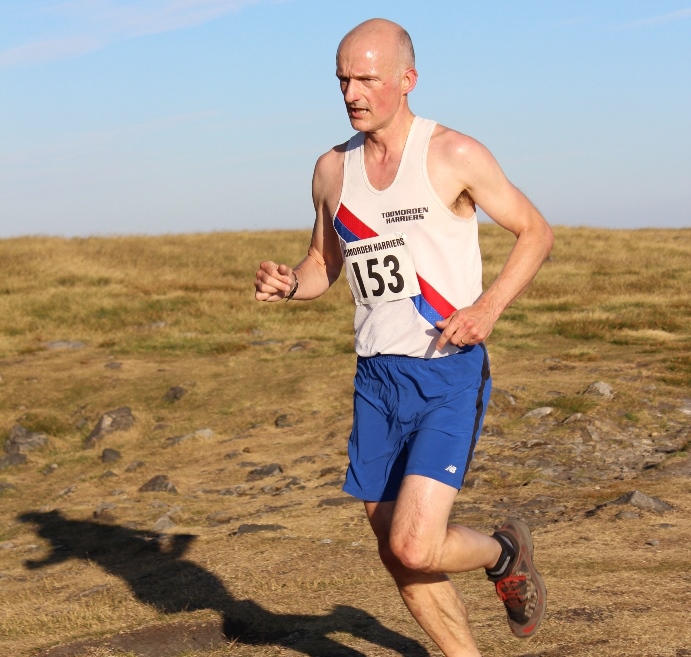 Stoodley Pike was bathed in summer sunshine on Tuesday for the annual dash to the eponymous monument and back. 81 runners opted to miss the England match in return for the opportunity to race the 3.1 mile route across the West Yorkshire moorland. The heat made for tough conditions, especially on the initial climb up from the valley bottom. Although the ground was firm underfoot the parched grass and dusty track made for a breakneck decent from the Pike. There were some skinned knees for some and an impressively bloody nose for one runner who had overcooked it slightly on the way down.
The female race was won by the in-form Annie Roberts. She had warmed up for the race by completing the Saunders Mountain Marathon the weekend before. She claimed first place in the Stoodley Pike race in 23.25. The second placed female for Todmorden was Rebecca James. She finished second in her age group and 8th female overall in time of 29.17. The third placed female for the Harriers was Jane Leonard. Jane also scooped the first prize in her age group (FV60). She finished 11th female overall in 30.34.
There were fine performances also in the men’s race. Andy McFie continued his run of form as a new MV50 by winning his age group and claiming 11th place overall in a time of 23.42. Dan Taylor, experiencing a return to form, finished in 16th place overall (5th MV40) in 25.13. It was clear from his expression in the finish funnel that he had given the race everything he had. Third home for Todmorden was Rob Tyson. He completed the course in 25.53 in 20th place.
A special trophy was presented to the winner of the U18 age group – Iris Palmer of Halifax Harriers. The Graeme Wrench Trophy was presented in memory of Graeme, a founder member of Todmorden Harriers who sadly passed away recently. The proceeds from the race will be donated to SANDS, a charity that was supported by Graeme.