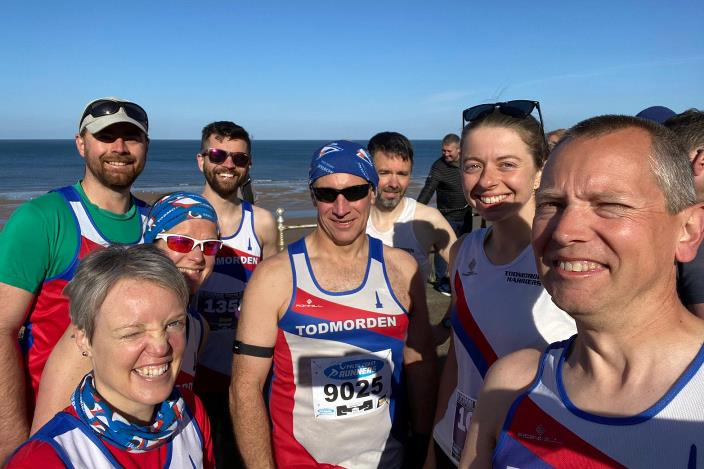 Todmorden’s club championships were back on the road this week with a long road counter in the form of Blackpool Half. A flat as you like, out and back ‘PB’ course down Blackpool Promenade. 9 Harriers made the trip to the seaside with a series of really strong performances. Performance of the day probably goes to Kim Ashworth who took a formidable 2 and a half minutes of her previous PB. There were also excellent performances (yet again!) from Mark Tempest in as 2nd V50 and the honour of first Toddie back went to Dom Leckie who broke the 90 minute mark. Overall there were 497 finishers and all Toddies finished comfortably in the top half of the field.

The first race of the week was a short but sharp midweek affair. Packing in over 1600ft of ascent into a 2 and a half mile course it’s one for stout legs and brains firmly in pockets for the way back. Two Toddies tested their mettle with Bon Halstead finishing a respectable 3rd V60 and Chairman Stu just six places behind overall in 79th.

Equally short and sharp but not quite as steep was the final Bunny Run fixture hosted by Wharfedale Harriers. At 3 miles and only 300ft of elevation this is one of those tricky races that sounds simple but catches you out by being very very fast. Two Toddies made the trip on Tuesday evening with Dan Taylor running a commendable 20:17 and finishing 47th. Jane Leonard also finished 139th and was 5th in her category.

Word from Todmorden Harriers foreign correspondent has it that just one Harrier was representing overseas this week. The Breña Baja climbs over 4000ft in 12 miles and in plenty warmer temperatures than we are used to contending with in the North of England. Richard Butterwick on a quiet week for him (must be on holiday!) finished 19th overall in a very credible 2:26:01.

Back in the Lakes and one Harrier took on the formerly named Anniversary Waltz. 11.5 miles and 3600ft of climbing in prime lakeland fells make for a classic race. James Riley finished in 125th in a whisker over 2h30m.