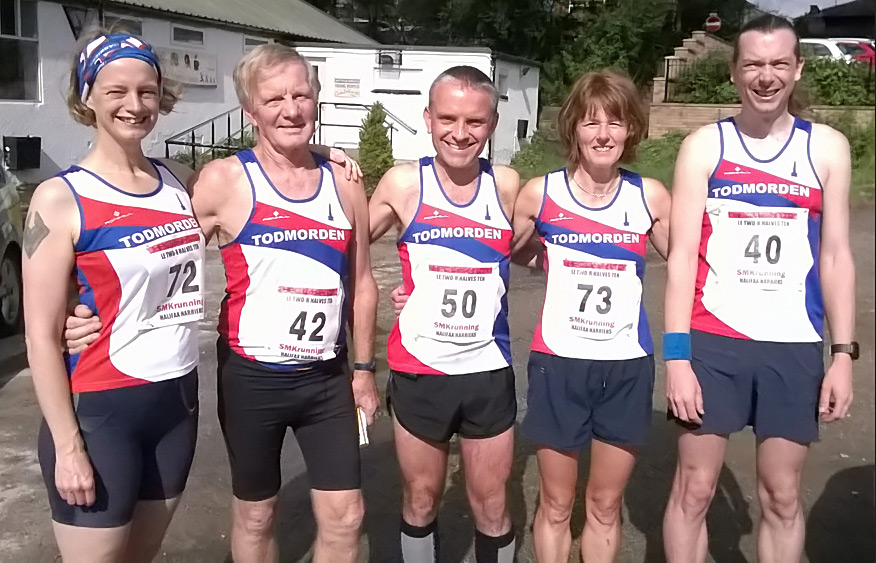 Pictured above: Le Two-r Halves Toddies before the race.

Full Bronte Five 5/6/2014 The Yorkshire 5 mile Championships were incorporated in the Full Bronte 5 at Haworth on Thursday. Todmorden Harrier Paul Brannigan took silver in the over 50 (V50) category behind Mark Hall of Otley. They finished 5th and 6th overall beating the entire over 40s and over 45s competitors. Chris Preston was Tod’s lady representative finishing 90th of 133 runners. Calderdale Way Ultra 7/6/2014 A very busy weekend for Todmorden Harriers included a win for Craig Stansfield in the 50 mile Calderdale Way Ultra. Stansfield’s time of 8 hours 15 minutes was 36 minutes clear of Danny Seal in second place. Full Results 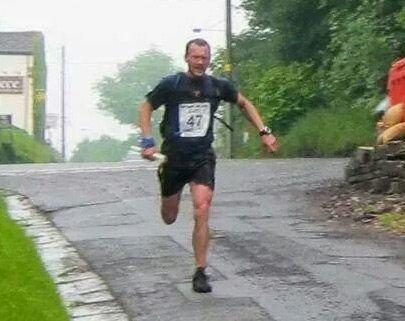 Ennerdale Fell Race 7/6/2014 It was off to the Lake District last Saturday for the Longest Race in this year’s English and British Fell Championships, the Ennerdale Horseshoe. The race has 23 miles of running and 7500 feet of climbing in, but due to the forecast thunder and lightning the race was shortened. The new route did not go to any of the mountain summits, instead making its way to Buttermere and back via the cols. The route then had a loop from Black Sail Hut which headed up towards the mountains of Great Gable and Kirk Fell before descending back down to the Black Sail Hut. There was then an 8 mile run down the road/track and then around the edge of Ennerdale to the finish. Jon Wright led the way for Todmorden with a solid run finishing just over 3 hours in around 30th position. Next to finish was Ivan Gee a great result in what was his first big lakeland race. The ever improving Ben Crowther finished next after another solid run, (again he was on the cusp of championship points in the V40 category we wait to see the official results for clarification). New Toddie Dave Garner was next to finish not far ahead of Dan Taylor, who overtook a tiring Paul Hobbs just yards before the finish. This means the team got the 6 counters around for qualification for the championship. In the ladies race Lucy Burnett stormed up the hills for a 16th place result and some well earned championship points. Clare Harris and Kath Brierley decided 21 miles wasn’t enough so added an extra mile going back to a checkpoint they had missed. A good day out for all, even though the route was changed it was still a tough challenge.
Website: cfra.co.uk Le Two-r Halves 8/6/2014 To commemorate the Tour De France passing through Cragg Vale Le Two-r Halves 10 mile race consisted of a 5 mile run up Cragg Road, the longest single gradient in the UK, and then a return back down. Half of the 6 Toddies won prizes with Robin Tuddenham finishing 2nd to Blackburn’s Shaun Livesey. Elise Milnes took the prize for 1st V50 and Ian Stansfield for 1st V70.
Other Tod results: Richard Butterwick 20th in 73.37, Michael Harper 22nd in 74.44 and Julie Wyant 61st in 94.22.
Results on Halifax Harriers website
WebmasterBusy Weekend for Todmorden Harriers06.08.2014