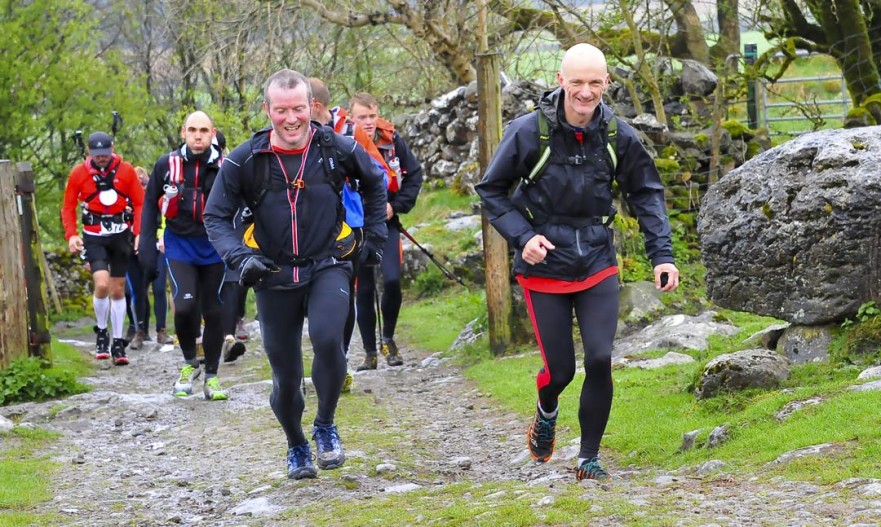 Saturday 26th April, 8.30am, saw nearly 400 runners set off for the 52nd Fellsman event – widely regarded as one of the most demanding ultra-races on the calendar. The first climb of the 61 mile route took the entrants to the top of Ingleborough, before taking them on a tour of the Yorkshire Dales. The day dawned wet with heavy rain and the fell-tops in cloud, with the prospect of thunder storms but, in the end, sunny spells helped dry out the runners and walkers.

There were 117 non-starters out of the 500 entrants to the race, which involves more than 3,350m (11,000ft) of ascent. 383 tackled the route over most of the fells of the southern Dales. Adam Perry and Kim Collinson were joint winners of the event in 10 hours 51 minutes. Third place went to Jex Bragg, who finished 37 minute behind the lead pair.

Five hardy Todmorden Harriers lined up on the start line for the 60th running of the Three Peaks Race, which traverses the famous Yorkshire Dales Mountains of Pen-y-ghent, Ingleborough and Whernside. This is one of the oldest, most famous and best organised fell races in Britain. First run in 1954, the Race covers 24 miles of the most rugged and spectacular countryside in the Yorkshire Dales National Park, taking competitors to a height of 2,500 feet above sea level. High winds and boggy underfoot conditions made the going tricky at points. The men’s race was won by Ricky Lightfoot in 2.53.16. The women’s race was won by Victoria Wilkinson in 3.16.17. Over 780 runners started the event. The first Toddie home was Craig Stansfield, finishing in 75th place in 3.45.52. First lady home for Todmorden was Elise Milnes, finishing in 649th position in a time of 5.21.14.