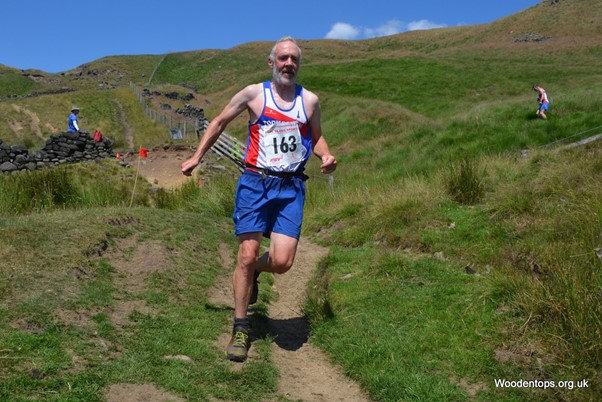 Following South Mynd on 19th September, the final tables have been produced which confirm Dave Collins as national champion in his V65 age category. This is a superb result for Dave, who has been in exceptional form this year, and caps a long road to recovery after Dave broke his left femur and a tendon in his right leg in a fall at Cragg Vale fell race in summer 2019. Surely the inspiration to anyone recovering from serious injury.
Needing 4 races from 6 to qualify, Dave didn’t run the first two and only entered the fray at Alderman’s Ascent in July, finishing 1st V65 in the sizzling heat. Dave followed this up with a 3rd V65 at Kentmere, which focussed his mind somewhat, as the possibility of becoming national champion first seemed to open up. Another 1st V65 finish in the short race at Black Combe meant that it was all to play for over the 15-mile South Mynd race in Shropshire. Dave came home in 2nd V65 to seal what was in the end a comfortable win in the Championship standings. Dave credited Rebecca Patrick with guiding him round the course, having not been able to recce it, although the downhill-lover admitted “the route into the finish was a bit of a safe choice, I’d have stayed high and taken the steeper descent if I’d been by myself”. If ever there was a time for low-risk running, surely that was it!
Following his horror fall in 2019 and the subsequent operations and new metal body parts, Dave initially spent lots of time on the bike before lacing up his fell shoes. Dave credits the various online lockdown challenges with providing the motivation to get out there and start putting the miles in which allowed him to build back up to a decent level of fitness before races finally restarted this spring. After fellow clubmate Richard Blakeley claimed the V70 national champion title several years ago, Dave’s advice for anyone wanting to follow in their footsteps is “grow old, have a grey beard, break a bone, move to Mytholmroyd”. Food for thought…
Results:
• Alderman’s Ascent (Short) – 1st V65
• Kentmere Horseshoe (Medium) – 3rd V65
• Black Combe Dash (Short) – 1st V65
• South Mynd Tour (Long) – 2nd V65
Overall standings:
• 1st Dave Collins – Todmorden – 81 points English Champion
• 2nd Keith Holmes – Dark Peak – 69 points
• 3rd David Gould – Mercia – 63 points