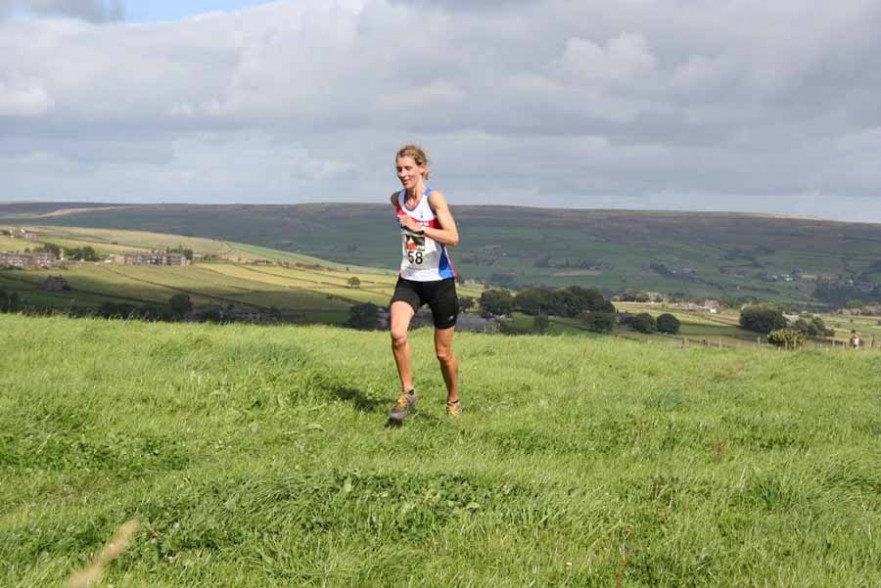 Although not a Tod Harriers organised race the club sent many volunteers and runners up onto the tops on Saturday afternoon to help with this Fete fundraiser. The runners were of a very high quality with Todmorden and Calder Valley occupying 8 of the top 10 places. Calder Valley’s Alex Whittem won comfortably and Todmorden’s Nick Barber and Paul Hobbs had excellent runs to finish 4th and 6th. Todmorden’s Rebecca Patrick has made a habit of picking up prizes this year and on Saturday she took the prize in the ladies age 40-45 category. Tod’s Mark Anderton and Matthew Annison provided the day’s most exciting finish hammering their way across the final field to the finish line where the officials could not separate them, both clocking 49.48 in joint 45th place. The family focussed fete provided husband and wife Roger and Paula Haworth with on site child-sitters and the rare opportunity to run in the same race, Roger finishing 32nd and Paula in 84th. This was made all the more poignant as part of the proceeds were going to the Candlelighters charity who provided support to the Haworth family during their son’s illness.
Results:
4 Nick Barber 38.52
6 Paul Hobbs 40.14
31 Dave Collins 46.01
32 Roger Haworth 46.09
33 Tom Barker 46.09
38 Michael Harper 48.30
41 Rebecca Patrick 49.04
45 Matthew Annison 49.48
45 Mark Anderton 49.48
84 Paula Haworth 58.36
101 Reg Czudek 66.56
108 Nina Fedorski 69.10
110 Dave O’Neil 71.45