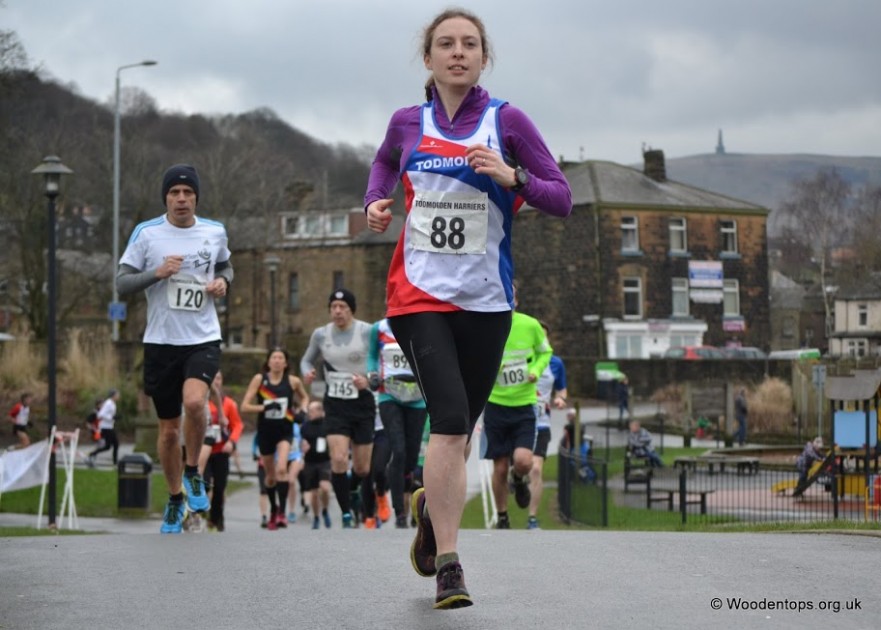 Todmorden Harriers organised the local Flower Scar Fell Race last Sunday. This is a classic race with over 2000ft of climbing within 7.3 miles. Last year it was part of the English Championship series which shows the quality of this race. This year we had a new race organizer in Darren Tweed who stepped into John Wright’s shoe’s after doing many many years of organising this race. Darren couldn’t have started any better when he discovered that the start of the race had to be change due to diseases on beech trees within Centre Vale Park. A Containment Notice had been issued by the Forestry Commission. Tree felling was taking place and, as the disease can be spread on footwear, there was a risk of it being spread onto moorland. So the start moved 10 mins away to Todmorder High School playing fields. 6 Toddies ran amongst the 120 runners and Dave Garner was the first male Toddy back with a time of 70.48 putting him in 31st place and 6th in his V45 age category. Kath Brierley was the first lady Toddy back in 76th position with a time of 82.15 and winning her FV50 age category. Dave Collins continued with his run of being 2nd in his new V60 age category with a time of 74.22 giving him 49th position. Tod Results are…..
• Dave Garner – 70.48 (31st)
• Dave Collins – 74.22 (49th)
• Tom Barker – 75.49 (53rd)
• Kath Brierley – 82.15 (76th)
• Matt Annison – 83.09 (82nd)
• Peter Ehrhardt – 113.05 (112nd)

Over towards Tockholes, near Darwen, Pauline and Greg May took on the Mr Sparkles Dark Un, night race on Friday evening. 8.1k with 214mtrs of climbing attracted 68 runners. Pauline’s (picture attached cutesy of wooden tops) time of 42.33 gave her 2nd Lady’s position with Greg finishing 24th with a time of 45.51.

Over in Saddleworth, The New Chew score event was taking place once again and yet again, Mandy Goth along with her team partner, Kirsty Patten, won the ladies teamwith 129 points. Phil Hodgeson (145 points) and John Allen (117 points) were among other Todd Harriers doing the event as Solo entrants.

Meanwhile, over in Ilkley, Paul Hobbs ran amongst a very strong field of over 300 runners for the Ilkley Moor Fell Race. 5 miles and over 1300ft of climbing gave Paul a time of 49.28 and a respectable 43rd position.