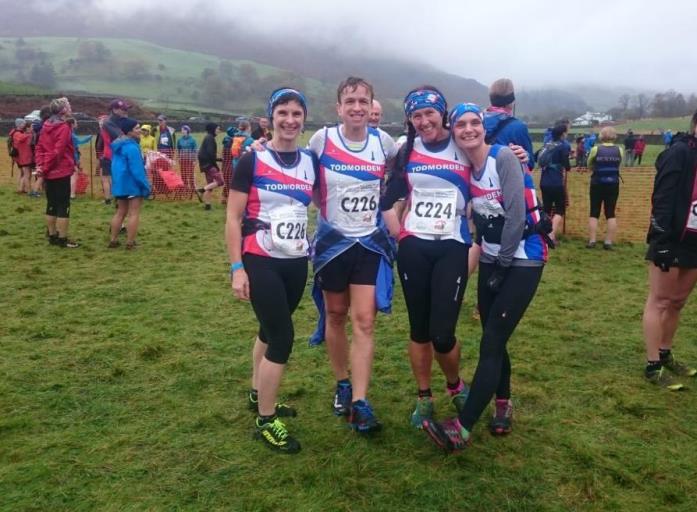 Whilst the Calder Valley enjoyed autumnal sunshine last Saturday, up in the Lake District 245 teams from 145 fell clubs gathered in challenging conditions to compete in the annual FRA Relays. This 4-leg relay attracts a highly competitive field from across the country, and this year it was impeccably organised by Ambleside AC, with race HQ in the beautiful village of Grasmere. The clag was down with constant drizzle, which created limited visibility and difficult mountain conditions, being wet underfoot with some slippery rock ascents and descents. Leg 1 is a solo leg and the route headed up and back to Seat Sandal covering 2400 feet in 5 miles; Leg 2 is a paired leg covering 2800 feet in 6.7 miles with a climb up to Great Rigg via Stone Arthur ridge. Leg 3 is always a paired navigation leg and the conditions and checkpoints provided for a particularly tricky navigation test this year. Finally, Leg 4 (the glory leg) is another leg for the solo runner; covering 2000 feet in 4.3 miles, it headed up to Heron Pike and to Stone Arthur before a hair raising descent back to the finish field.
Four Tod Harrier teams completed the event this year. The men’s Vet 40 team, captained by Graeme Brown had a very successful day, coming 36th overall and 6th in the Male Vet 40 category with notable performances from Graeme and Jon Wright putting in a strong performance in Leg 2 to finish in 36th on that leg, and Paul Hobbs finishing in 39th position on Leg 4.
Captain Lucy Hobbs was equally delighted with her Female Vet 40 team, who all put in solid performances to come in 158th overall and 5th FV40 Team. Despite the challenging weather conditions Claire Duffield and Lucy Burnett had a particularly strong run on the navigation leg.
The women’s open team also enjoyed the event, coming in 183rd overall. Pictures are: Claire Duffield, Lucy Burnett, Louise Greenwood and Katch Skinner. Zoe Dijkman captained this young team with a stand-out performance from Annie Roberts, coming 2nd woman only to international fell running legend Victoria Wilkinson on Leg 1. Tod Harriers were delighted to see so many of their talented younger women competing on the national stage. Rosa Blackburn and Katch Skinner both cut their teeth in Lakes racing and both said they would be coming back for more!
Unfortunately for the men’s open team, they were disqualified for a dibber error, despite Andy Worster’s sterling run on Leg 1 (8th position). Most importantly, however, all the Harriers agreed that it was a fun day out in the Lakes with their teammates!