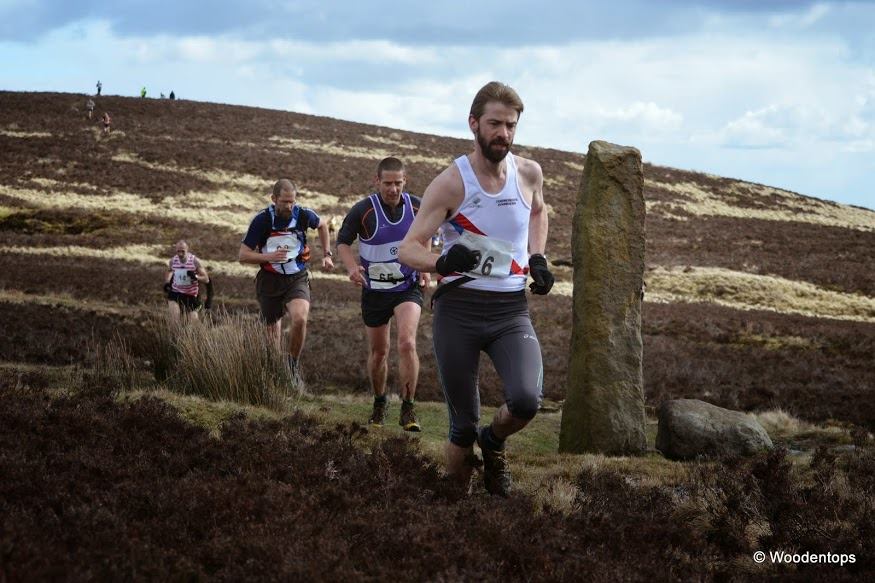 The annual Harriers versus Cyclists, organised by the Bingley Harriers, is an intriguing challenge of an event. It pits runners and cyclists against each other over the same course at the same time. The mud quotient was reasonably high for this year’s event, which saw a new course and thus new record times to be set. The teams compete for The Fisherman Trophy for one year, named after The Fisherman Inn from where the race starts and where the prize giving takes place afterwards. This year saw 93 runners and 143 cyclists competing over the 5.5 mile route, beginning from the pub before heading through Milner Fields Farm to Shipley Glen, alongside the Glen Road and then to the summit of Hope Hill. A loop of the hill followed before returning home via the outward route.
Todmorden Harreirs were well represented at the event, with 16 runners taking on the challenge against runners and cyclists from across the region. First man home for Todmorden was Ivan Gee – an impressive 20th place in 41.22. Craig Stansfield followed Ivan across the line 13 seconds later, finishing 21st in 41.35. Robin Tuddenham completed the top three spots for Todmorden’s men, finishing in 42.55 (28th position).The battle for male fell champion was settled in this final race with Ivan pipping Craig to the title in what has been an exciting season long competition.

First lady across the line for Todmorden was Kath Brieley, finishing in 117th place in 51.29. Kirsty Patten came through in 55.15 (151st position) to take the second spot for Todmorden’s ladies. Gemma Ford on her bike and Mel Whitmore on her feet enjoyed healthy club rivalry, with Gemma just pipping Mel across the line. Gemma finished in 1.00.23 (187th place) with Mel only 16 seconds behind her in 1.00.39 (188th) and third Todmorden lady on foot across the line.

The full results for Todmorden are as follows: