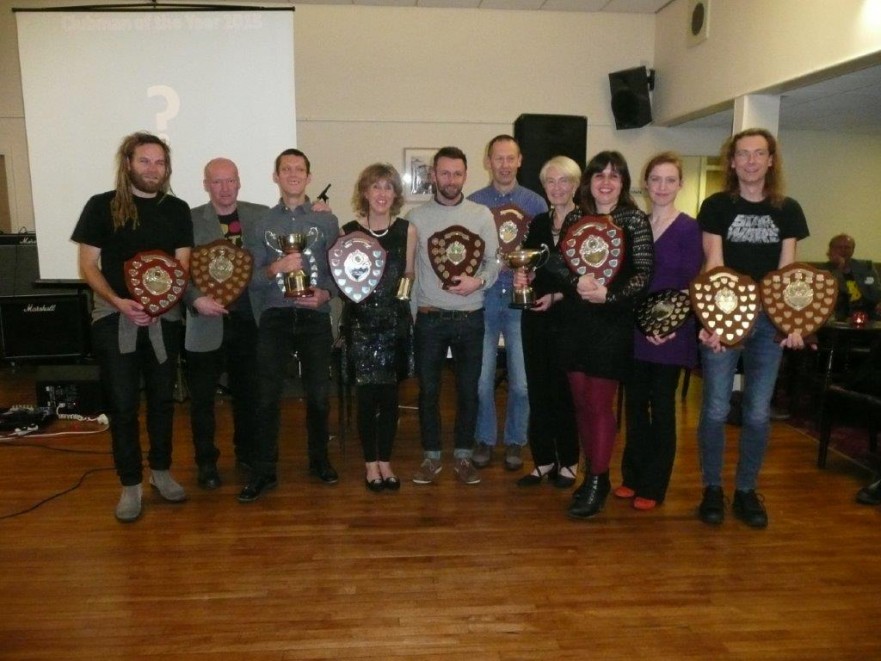 Todmorden Harriers held their Grand Prix Celebration and Christmas get together on Saturday 6th December.  The 2015 Grand Prix season has once again reflected the diversity of our club with large numbers of runners of all abilities and ages running fell, road, trail and cross country races of differing difficulty. The Grand Prix is contested over 33 races with the different disciplines of fell, road, trail and cross country each commanding their own hotly contested trophies. The most prolific runner this season was David Leslie who both completed and impressive 21 of the 33 races.

The road races saw 49 Todmorden Harriers entering at least one race with nine qualifying for the Grand Prix. Nic Corrigan took the title of Road Champion with Myra Wells a worthy runner up. Winning his 2nd Road Championship was the 2008 winner, Richard Butterwick. Michael Harper and Joe Courtney were 2nd and 3rd respectively. V50 Champion was Paul Cruthers, V60 Champion was David Leslie and V65 Champion was Peter Ehrhardt.

The fell championship saw 12 qualifiers with 76 Harriers competing in at least one of Fell Grand Prix events. More used to picking up prizes on the roads, but enjoying a successful season on the fells was the winner of Ladies’ Fell Championship Mel Blackhurst. Qualifying for the first time for the Championship since 2011 was the men’s Champion, Paul Hobbs, topping off a very strong season’s running. The first and second runner up were Ben Crowther and Chris Goddard. The other Champions in the men’s fell event were: V45 Dave Garner, V55 Dave Collins, V60 David Leslie, V65 Peter Ehrhardt.

This trophy is given to the highest placed runners in the Grand Prix who have not previously won any other trophy and is intended to encourage participation in the Grand Prix from relative newcomers to the club and the sport. This year’s Champions were Jane Mitchell and Chris Goddard.

The final race of the cross country championship was only contested on the afternoon of the Grand Prix prize giving. The victors were Pauline May and Andrew Wrench.

To qualify for the Grand Prix runners must complete at least eight races covering each of the terrain disciplines. An impressive 18 runners qualified for the prestigious competition. The winner was Kath Brierley, taking the title for the first time since 2008. The first runner up was Mel Blackhurst with Paul Brannigan taking the second runner up spot. Mel Blackhurst was awarded the Grand Prix Tankard for qualifying for ten consecutive Grand Prix.

Club Champion over Road and Fell was Nick Barber, who took the title for the third time. The Most Improved Runner award was presented to Richard Butterwick. Club Person of the Year was Simon Anderton.