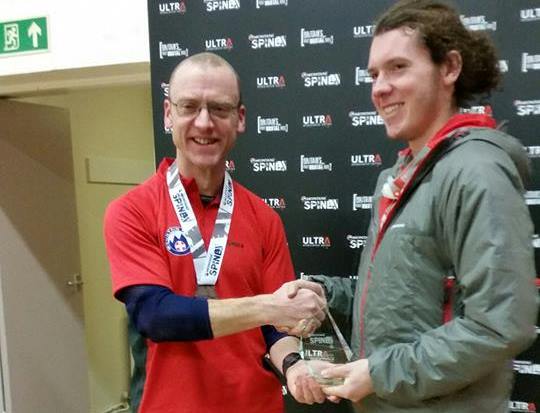 Our own Jono Wright took on the challenge of the Spine Race MRT Challenge event over the weekend. The challenge event is half the distance of the Pennine way (108 miles) but is done in one go….no overnight rest! Added to the time of year the lack of daylight hours and of course, the predictable awful weather we have had, this is a very, very hard race to complete. It starts in Edale, following the Pennine Way with the MRT Challenge event finishing in Hawes. Jono, as a member of Calder Valley Mountain Rescue, was running for them to raise funds for the team. After setting off at 12 noon Saturday, he managed to finish at 12.30am Monday morning in 3rd place! A fantastic achievement considering the weather, time of year and the terrain!

Meanwhile, on the Sunday morning, Jilly Davies took on the whole of the Spine Race, setting off a day after the Challengers and ready to go the whole hog to complete the whole of the Pennine Way, all 270 miles of it! However, after starting in the worst weather the Spine race organisers have seen on the event, Jilly had to retire after 9 hours of wading through knee deep snow, icy waters and mud. She had been on her own in that time whilst crossing Kinder Scout and Bleaklow and was waiting on a friend of hers at the checkpoint. She soon discovered that her friend had been rescued by the Mountain Rescue team with a suspected broken ankle. Jilly was then advised to retire as she had another 50k of peat bogs to get through in the dark and was in danger of being timed out. Well done Jilly for taking the brave, safe decision to retire and save herself for next year!