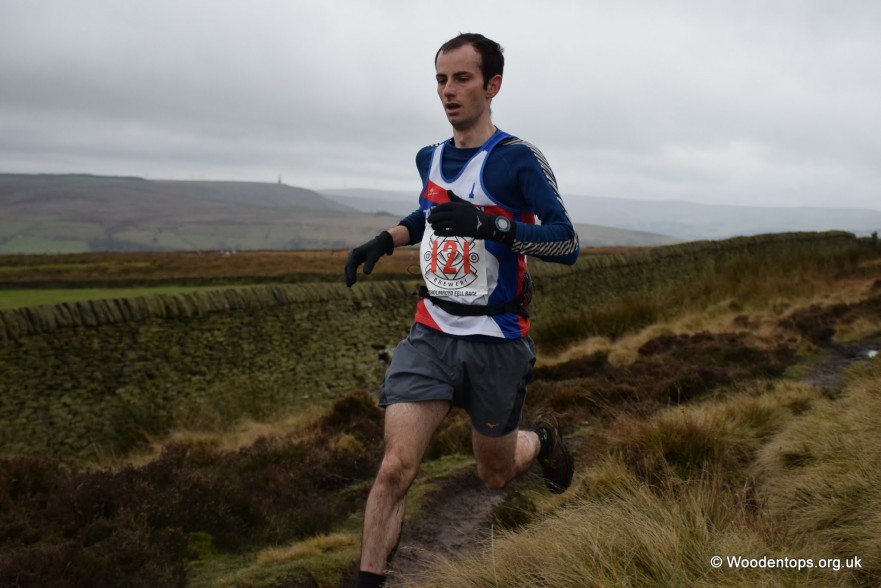 Organised by Tod Harrier Dan Taylor, this race takes you to parts of Todmorden rarely visited. After a stiff climb up Knotts Cliff the route crosses the top road near the old Sportsmans Pub, and then onto Stansfield Moor. Here there is a choice of route, either direct and risk the tussocks/heather, or a longer route past the Pole Hill Radar Station, then down Dukes Cut, which is very runnable. By this part of the race local teacher James Logue had opened up a 30 second gap on Andrew Worster of Tod Harriers. The route passes Noah Dale, there is then a long run along and up to the Trig point at Hoofstones Heights. At the bottom of the climb there is a broken bridge which is collapsed and dangerous to cross. The bridge has now been christened the ‘Indiana Jones Bridge’, by prolific fell runner and nice guy Darren Fishwick of Chorley. At the Trig Point James led Andrew by approx. 1 minute. The section back to the Sportmans is across unmarked moorland and navigation skills are required. James took a tight line and encountered some of the little streams that cover the moor slowing his progress. Andrew, having reccied the event, took an arcing line keeping to the higher ground. He left the moor in 1st place, having past James without either of them seeing the other one. Andrew held onto his lead to the finish, where he had knocked over 4 minutes off the record, finishing in 1.04.04, James was also well under the old record. In the ladies race there was a similar battle with Jean Powell of Wharfedale and Lucy Burnett of Tod racing each other all the way down the hillside to the finish, Lucy holding Jean off by just 9 seconds. There was a good turnout for Keighley who took the womens and mens team prizes back over the hill. Dave Collins of Tod Harriers continued his good form with 1st V60 just 12 seconds outside the V60 record. Thanks go to the Calder Valley Search and Rescue Team who provided safety support for the event, Kate and Tim at the Staff of Life who warmed the competitors up afterwards with coffee followed by beer, and to the landowners who give us permission for the race to cross their land.