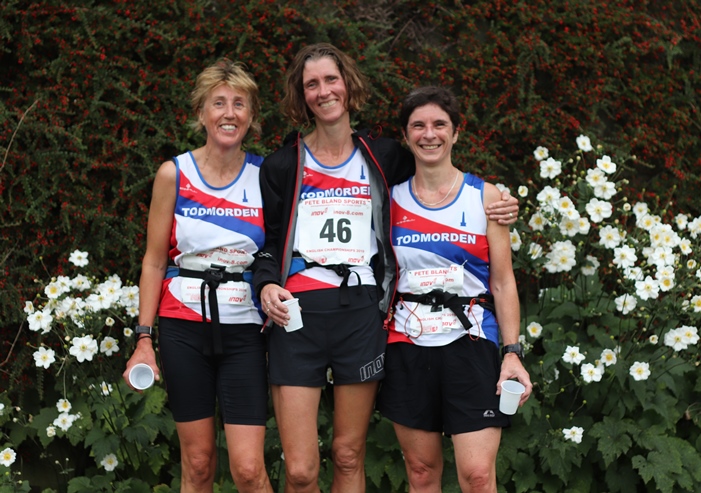 Last Sunday a posse of Todmorden Harriers took part in the Ilam fell race, the last in the English championships this year and also featuring in the Todmorden Club Championship.
The short race is 4.5 miles, but with 1,400 foot of ascent packed in. It starts on a ridiculously steep slope straight up Bunster Hill before descending into the Dovedale valley. The run then follows the picturesque River Dove before crossing the iconic Dovedale stepping stones followed by another steep climb to the summit of Flagpole Hill. After a short ridge run, the route heads across Thorpe Pastures before ascending and descending the well-known Limestone Hill, Thorpe Cloud and then it’s a slog back along the river and across the fields to the finish at the picturesque Ilam Hall.
The women set off first in humid, but dry conditions. The race was won by Sharon Taylor of Helm Hill in 44.09, and Todmorden’s Annie Roberts was not far behind to finish in 46.05 and fourth overall. Rebecca Patrick (50.41- 17th), Claire Duffield (52:16-21st) and Melanie Blackhurst (53:18- 22nd) finished within minutes of each other and were the first vet 40 team back and also secured an overall Bronze medal in the English Championships.
The men’s race was run two hours later in much wetter conditions and was won by Mark Lamb of Keswick in 35:18. Andrew Worster, first Toddie back, had a great race to finish 12th overall (37:02) and 11th place overall in the English Championships. Chris Goddard had a strong run to finish 66th in 44:10 and Stuart Wolstenholme finished 120th in 53:55. Paul Brannigan finished in 1:16:14 and Peter Ehrhardt in 1:17:23.