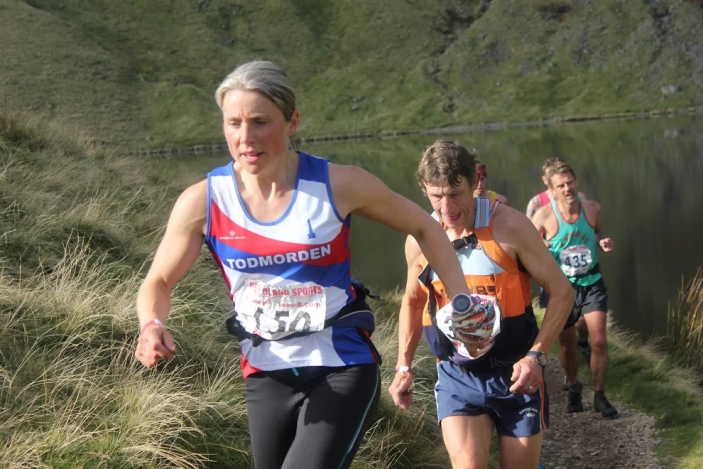 There are some runners who live for days when the clouds hug the fells of the Lake District, keeping visibility as near to zero as possible and making fell races that much harder with the navigation. They even do rain dances and pray for foul weather, just so that it makes the race that little bit more difficult. Unfortunately for these types of runners, it was not to be at the Langdale Horseshoe on Saturday. What greeted all the runners instead was glorious warm sunshine and fantastic views of all the fells of Langdale. It truly set up a great spectacle for both runners and spectators.

This year, Langdale was chosen as the last race in the English Champs series and the numbers of runners exceeded 380. It was also in our Grand Prix and there was a lot at stake. Leader of the Fell Champ Races, Andrew Worster wasn’t available , which meant Nick Barber, Paul Hobbs and Jonathan Wright had the chance to make grounds on Andrew and with the incentive of extra GP points due to the race being an English Champ race, it was game on!

The race is just over 13 miles and climbs over 4700ft. The route starts at the Old Dungeon Ghyll pub, at the head of the valley, and heads over Thunacar Knott, then over towards Esk Hause before heading over the tops of Bowfell, Crinkle Craggs and Pike O’Blisco before heading back down to the pub.

Jonathon Wright was the first Toddy back in a time of 2.22.29 and in 43rd place overall. Just over 2 mins separated Paul Hobbs, Graeme Brown and Nick Barber. Rob Tyson continues his rise up the Toddy ranks by finishing under 3 hours. Gemma Ford was the first lady back in 3.04.30. Full Toddy Results are: