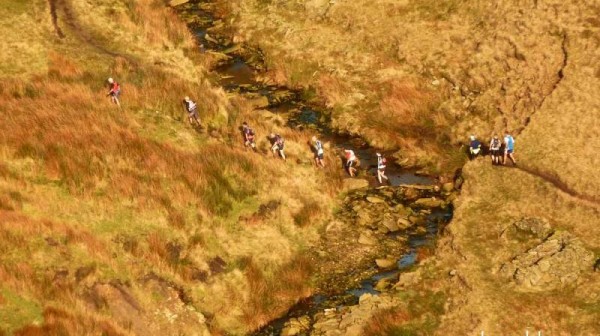 The Tour Of Pendle

The clag was down on Saturday for Clayton-Le-Moors Harriers’ flagship race, The Tour of Pendle. This classic, end of season race is without doubt one of the toughest the Pennines has to offer, packing in nearly 5000 feet of climb in just shy of 17 miles. It’s hard to believe this hill can pack in such variety of gradients, terrain and navigational challenges. The second half of the race presents the bulk of the challenge, culminating in the final of six climbs, straight up the steep race of Pendle Hill’s Big End. Staving off bouts of cramp is half the battle at this stage.
With an entry list of nearly 500 you’d think it’d be a simple case of following the leader, but with visibility seriously impeded above 350m this wasn’t to be the case. Paul Hobbs led the Harriers home in an excellent 17th place, despite losing around 2 minutes in the mist on the final descent. Andy McFie and John Allan came home in very respectable 42nd and 48th places whilst Dave Garner came a little further behind, having lost time too in the poor visibility. Other Harriers to complete the tough course were Phil Hodgson, Fiona Armer and Elise Milnes.