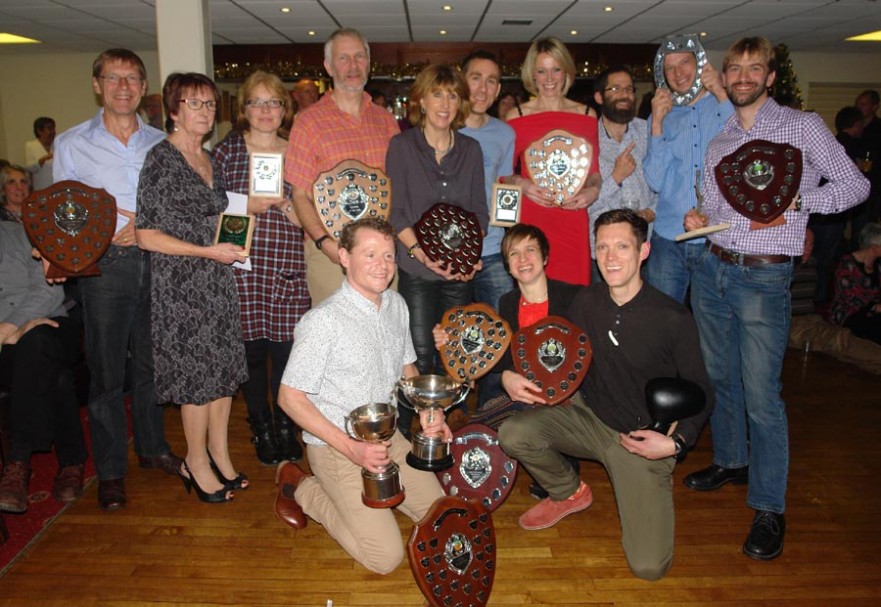 The presentation began with ‘Uncle’ Barry Chapman being thanked for his two years as Club President, he then introduced his successor – Richard Blakeley who will be Club President for the next two years. He is well known among the club and also a former road and club champion, Grand Prix winner for a record 4 times and also English Fell Champion for the V70 Category last year.
The 2014 Grand Prix season reflected the diversity of Todmorden Harriers – runners of all abilities and ages running fell, road and trail races of differing difficulty. There was a good presence at many events – over 20 turned out in 5 fell races, 2 trail and 1 road. The most prolific runners this season were Peter Ehrhardt and David Leslie who both completed 17 of the 33 races.

ROAD Championships
The road races saw 41 of our members entering at least one race and 8 qualifying – 4 of whom left it to the last race to do so. The Female winner was Sarah Glyde and the Male winner was Paul Brannigan

FELL Championships
Female winner First of the 7 women in what could be regarded as a comeback year is Lucy Burnett.
Male winner A close finish for the men’s title went to the final race and just 3 points separated runner up Craig Stansfield from the champion Ivan Gee

TRAIL Championships
With just three races to qualify this year for the Trail champs, there was an increase in qualifiers to 16 out of the total participation of 49. As ever the trophy is given to the highest placed runners who have not picked up any other award from the club. This year the mens was won by the ever improving Darren Tweed and The ladies by Louise Abdy.

Cross Country Championships
The final race of the series was run the afternoon of the presentation and results came in as the prizegiving began. This years winners are for the ladies Mel Blackhurst and the Men Team Captain Nick Barber.

Eric Stottard
This is award is given to the person viewed as having the best performance in English Championship Fell Races. Having competed in 5 of the 6 and narrowly missing out by one place in the English Ladies Top 10 the trophy goes to Lucy Burnett

GRAND PRIX TANKARD
This year 2 more members of the club received a trophy for completing 10 or more GPs – only the 5th and 6th in the club ever to do so – so a great award to aspire to. The successful 2 were Andrew Bibby and Simon Galloway.

GRAND PRIX
This year saw 88 runners entering at least one GP race and a quarter of them – 22 – qualifying by doing at least 8 races.
The main focus of the racing season, this year 5 members qualified for the first time. So a big well done to Michael Harper, Louise Abdy, Guy Whitmore, John Allan, Kirsty Patten.
The GP Champion goes for the 3rd year running – slightly behind his record total of last year is Paul Brannigan,

MOST IMPROVED RUNNER
This category was a difficult choice this year with a number of runners under consideration. The award went to someone who has improved not just in increasing their points scored, but also stepped up to harder, longer races; competed in team relays and qualified for all championships GP, Fell, Road, Trail and Club and running the most GP races. Well done to David Leslie.

CLUB CHAMPION
This year 6 made the qualification of 6 races – which is one from each Fell and Road category, short medium and long. Winning the Club Championship for the 5th time is Paul Brannigan.