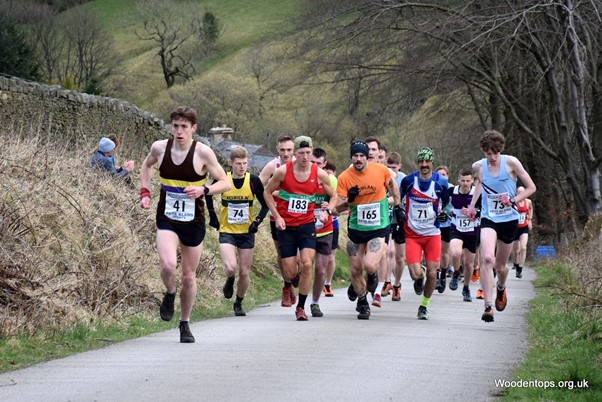 Senior race
It was the classic short Pendle Fell race on Saturday which was also the race for this year’s Lancashire Championship fell race. The race is 4.5 miles and takes runners from Barley nearly up to the summit of Pendle Hill before diverting them back down to the bottom of the main face for a lung busting steep climb direct back up ‘Big End’ to the summit. It’s then a dash all the way back to Barley with great running down the ridge and over a couple of fields. There were 3 Tod Harriers entered out of a field of 198 runners overall. The winner was Jack Cummings from Ilkley Harriers in a time of 30:21 which missed the course record by a mere 2 seconds, first lady home in 27th was Emma Hopkinson of Wharfedale harriers in a time of 35:30
All 3 Toddies returned home with prizes.
Doni Clarke was 5th overall in a time of 31:17 & 1st Lancashire man back
Jon Wright was 34th overall in a time of 36:22, 2nd V50 overall and 1st Lancashire V50
Bob Halstead was 100th overall in a time of 45:39 and was 2nd V60 overall
Bob also took the best prize of the day. A spot prize of £100 for coming 100th which was given to celebrate 100 years of Clayton Le Moors Harriers.

Juniors races
There was also a full set of Junior races from U9s up to U17s on courses of varying lengths. A number of Tod Harriers juniors took part, results as follows;
U9 race
4th Leo Wright
U11 race
14th Lily Aspinall
U13 race
24th Finn Tweed
29th Oliver Butler