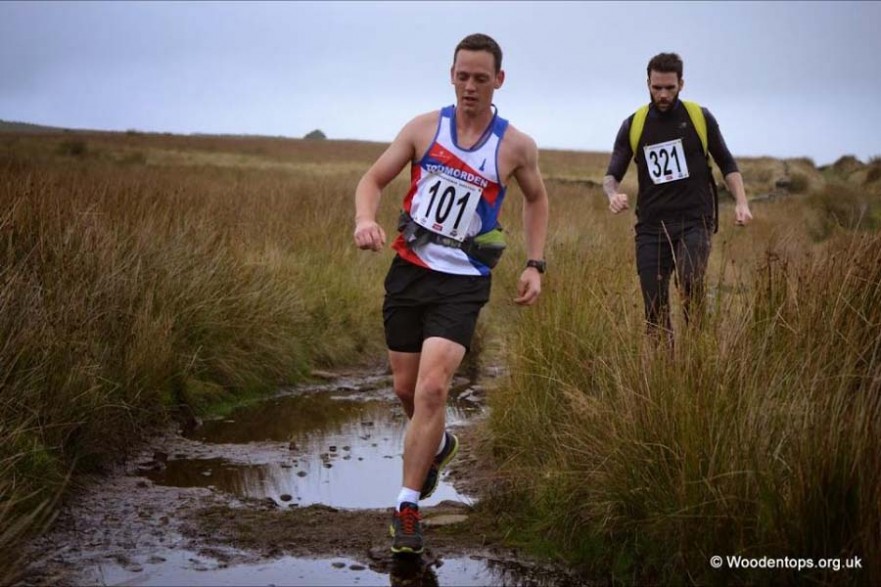 The annual running of the Yorkshireman Off Road Marathon and Half Marathon took place on Sunday 14th September. The overcast sky and slight chill in the air, coupled with relatively dry conditions underfoot, made for good conditions for the 400 or so runners who set off for either the marathon or half marathon event from outside The Fleece on Haworth’s Main Street. Runners were taken down the cobbles before the first ascent of the event to the top of Penistone Hill. A descent past Drop Farm was followed by the climb to the Top o’ Stairs. Runners were then taken along the conduit before crossing the main road and heading along the well marked tracks, past the windmills to the checkpoint at the site of the old Withen’s pub. The routes then split with the half and full marathon routes diverging. Those contesting the full marathon were along a route taking in, among others, the site of the former Denholme Velvets building, the Hewenden Viaduct and the Goit. Half marathoners were taken from the Withen’s pub across Fly Flats before heading through Oxenhope toward the finish back in Haworth.
The Half Marathon was won by Ben Mounsey of CVFR in 1.36.55. The first lady was Tanya Seager of Stainland Lions in 1.51.28. The sole representative of Todmorden Harriers in the Half event was Christine Preston, who completed the course in 2.34.47 finishing in 119th place overall.
The Full Marathon was won by Shaun Wilkinson of KCAC in 3.20.37. The first lady was Charmain Horfall (unattached) in new course record of 4.01.46. Four Todmorden Harriers completed the course. Steve Pullan was first home for Todmorden, finishing 14th overall in a time of 3.49.13. The other finishers were John Allan (16th) in 3.50.55, Jonathan Daniels (39th) in 4.17.08 and Paul Cruthers (109th) in 5.16.46.

Paul BranniganPullan a Fast One At The Yorkshireman09.18.2014