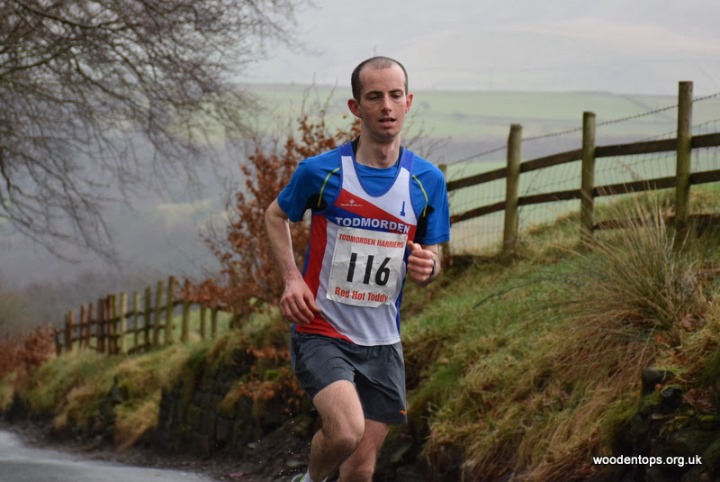 The weather couldn’t dampen the spirits of the runners toeing the start line of the annual Red Hot Toddy 10km road race on Sunday. Todmorden Harriers have long put on the event, but Sunday saw only the second running of the event over the new course that was introduced in 2016. The course begins benignly enough with two laps of Central Park. However, those who had been lulled into a false sense of security were in for a shock as the course leaves the comfort of the park and heads up the steep climb to Sourhall before taking runners across to the Bacup road. There is a long descent, not so comfortable on tiring legs, before runners head back through the town centre to re-enter the park and a slight downhill finish.
Todmorden Harrier’s own Andrew Worster continued his current fantastic run of form to claim 1st place in a time of 36.50, leading home a field of 140 runners. Many Toddies were involved in marshalling the course, but the Harriers were still able to field ten athletes in the event. The second man home for Todmorden was Robin Tuddenham. He took first place in the M45 age group and 3rd overall in 39.55. Duncan Cannon took third honours for Todmorden, finishing 7th in the Male Senior age group and 12th overall. A notable performance came from Ian MacLachlan in the M50 age group. Before the race he had been heard to say he’d be happy to finish in the top half in “anything under 50 minutes”. He completed the gruelling course in 46.42, finishing 29th overall and 4th in his age group! The Todmorden Ladies performed well in the tough conditions. Heather Rostron was the first Todmorden Lady to cross the line. She took the L35 title in 53.56, finishing 66th overall. Kate Henderson continued Todmorden’s strong performances with a 4th in the Female Senior age group, 73rd overall in 54.45. Evangelina Sargeant claimed third spot for Todmorden; she finished 6th in the Female Senior age group and 77th overall in a time of 55.14.
Before the senior race, the Red Hot Toddy Fun Run took place in Central Park. Runners of all ages completed two laps of the park to complete the 1 mile course. The proceedings were overseen by the mayor, who not only started the race but presented each competitor with a goody bag as they crossed the finishing line. There were fantastic performances from the young (and young at heart). The first competitor across the line in the Fun Run was Seth East in a fantastic time of 6.50.