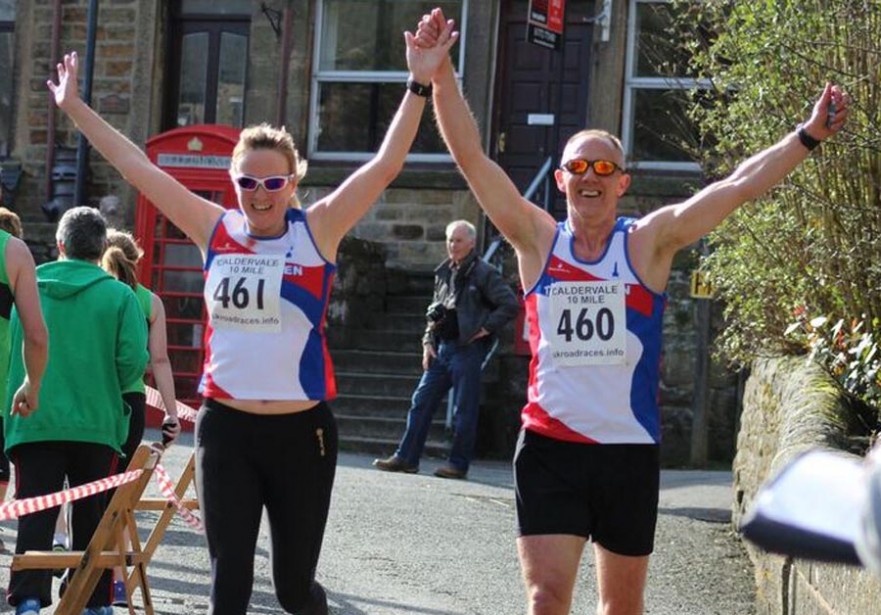 Guy Whitmore continued his 100% record in the Todmorden Harriers Grand Prix and keeping him as the only runner to complete the 7 races so far at the Caldervale 10 on Good Friday, despite mayhem on the M6, which left a lot of runners unable to make the start, Guy and his wife Mel and Kevin Coughlin, managed to get to the start and persuade the organisers to let them go ahead, about 15 mins after the runners had already set off. Guy ran the course with his wife, Mel who is training for the London Marathon. Paul Brannigan, 2014 winner of the Caldervale 10, then had the opportunity to leapfrog Guy at the top of the table if he could produce a great result. However, Andrew Worster, Richard Butterwick and Chris Goddard all thought the same and he finished further down the results than he would have liked. Andrew Worster continues his rich form at the moment finishing as the first Tod Harrier, despite suffering with a bad foot in the second half of the race. However, the battle of the day was down to Richard and Chris who managed to keep passing each other all the way round the route until at the final mile, Richard passed Chris on an uphill section and managed to stay in front and finish ahead by 9 seconds! David Leslie also continues to shine as his result could see him move further up the Grand Prix table from his current 3rd spot, once the points are available. Full list of Tod results are as followed……

Back on the fells, Jon Wright was the only Harrier in a field of 264 runners to do one of the oldest and historical fell races, Rivington Pike. With just short of 700ft of climbing in 3.2 miles, its a brutally fast race. Jon came in a respectable 19th position in a time of 20.09 giving him the 2nd place in his Vet45 category.