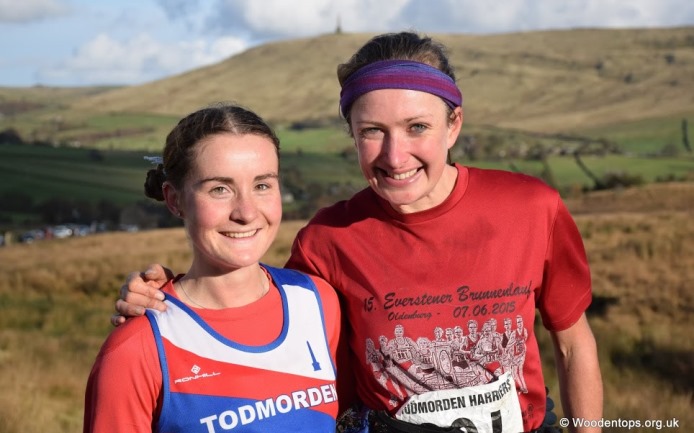 The Shepherd’s Skyline Fell Race hosted by Todmorden Harriers is a firm favourite in the fell running calendar. This year proved no exception with 328 hardy runners lining up on the start line for the senior race and 92 stoic juniors taking part in their events.
The seniors were given a real opportunity to warm up for bonfire night along the fast, muddy course. A long opening climb up from the Shepherd’s Rest pub to the eponymous skyline is followed by a very runnable stretch to Stoodley Pike monument. The runners are then treated to a steep descent off Stoodley Pike which is a test of nerve for even the most kamikaze-minded of descenders, immediately followed by a stiff climb back up the to the stoop stone – a real test for tiring legs. First place was taken by Tom Owens of Shettleston Harriers in 44.20. First lady was the in-form Holly Page who finished 17th overall in 48.52
Todmorden Harriers were out in force, with a score of runners hitting the hills. Annie Roberts (pictured with Hollly Page) continued her superbly successful season with a fantastic first place in the FU23 category, finishing 2nd lady and 31st place overall in 51.18. Kath Brierley came in second for the Todmorden ladies claiming 2nd place in the F55 age group (23rd lady and 190th overall) in 67.43. Jane Leonard took the Tod ladies 3rd spot in 73.17. She claimed 4th position in the F55 category (37th lady) and 233rd position overall. The first man across the line for Todmorden was Matt Keyse. He finished in 42nd position in 53.37. Second placed for Todmorden’s men was Josh Murphy (50th overall in 54.38) with Duncan Cannon coming in just 3 seconds after him in 54.41.

Matt FlanaganRoberts Races to Glory in the Shepherd’s Skyline11.07.2017