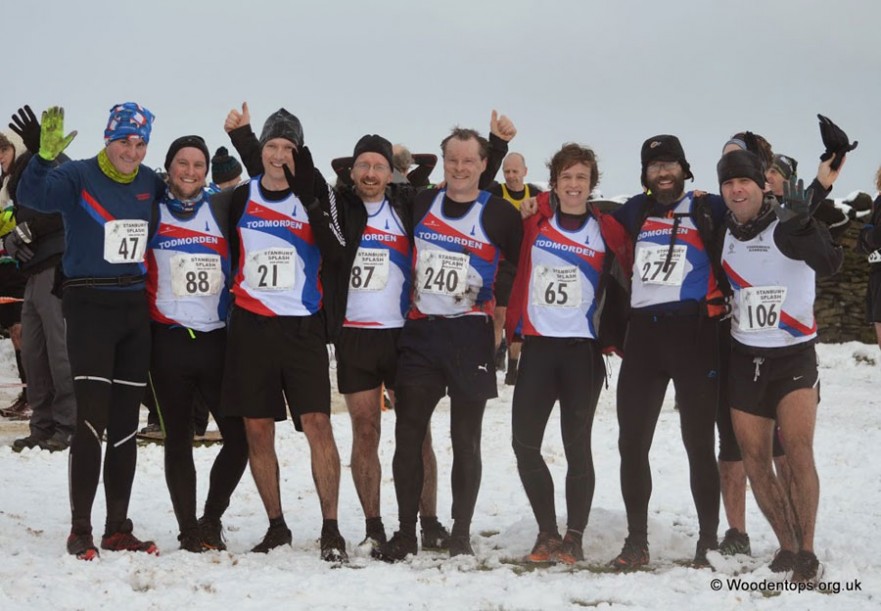 Stanbury Splash Race report
Deep snow on the ground? Minus readings on the thermometer? A bracing wind whipping fresh flakes in your face? Ideal conditions for the large contingent of Todmordern Harriers taking part in the annual Soreen Stanbury Splash race, organised by Dave and Eilleen Woodhead. The event celebrated its 32nd birthday on Sunday 18th January 2015.The 7 mile race is affectionately known as the Soreen Malt Loaf Run to runners young and old who just love the fruity taste of a Malt Loaf. Over the years the junior and senior races have introduced thousands of runners to the joys of fell running and seen superstars like Triathlon Olympians Alistair and Jonathan Brownlee; National and GB Internationals Ian Holmes, Robert Jebb, Tom Adams, Colin Donnelly, Jack Maitland, Mary Wilkinson, and Jo Buckley; and former World Champions Victoria Wilkinson and Carol Greenwood, make their mark in sport.
The conditions meant that this year’s race followed the shorter (5 mile) Stoop race route, rather than the usual 7 mile route. Runners were treated to stunning views across the moorlands, with the front runners breaking virgin snow as they made their way from Penistone Hill across to the Stoop itself. Snow on top of partially frozen boggy sections led to lots of mud for those running towards the middle and rear of the pack.