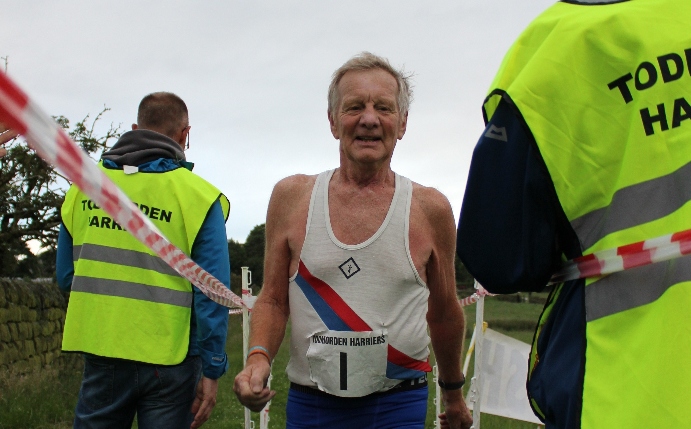 Ian Stansfield Hangs Up His Studs After 50 Years of Racing

The rain stopped and the clouds cleared leaving perfect weather for the Stoodley Pike Fell Race on Tuesday 4th July. The race drew 119 runners from across the region all eager for the treat of a run to the eponymous monument and back. It was a fast and furious affair, with overall winner Tom Adams coming home in a time of 18.36 – just 26 seconds off Ian Holmes record of 18.10 set in 2007. Holmes himself claimed third place overall, claiming the V50 prize in the process. The first lady was Caitlin Rice in 23.05. Both winners have been selected to run for England in the European Mountain Running Championships; a high calibre field indeed.
One of Todmorden Harriers’ longest running members, Ian Stansfield (pictured), was honoured at the prize giving. Ian began running competitively 50 years ago, competing in the first race from the pub to the Pike which was organised as a test of fitness for the then Todmorden football club. This year’s race marked Ian’s retirement from racing, although not from running. He received the V70 prize and was also awarded the Ian Stansfield Trophy in recognition of his contribution to the race and the club over the years. He will be present at next year’s event to present the trophy.
The first Todmorden Harrier across the line was Jon Wright. He finished in 5th place in 21.19. Second male home for Todmorden was Danny Aspinall, 12th in 22.40. The third placed male was Hebden Bridge barber, Jack Spencer, who finished 46th in 26.46. The first Todmorden lady home was Suzanne Straughan. She finished as 4th lady and 53rd overall in 27.20. Kim Ashworth was second Tod lady home in 80th position overall, in 30.45. Helen Hodgkinson completed the top three ladies for Todmorden – finishing 86th overall in 32.23.
The full results for Todmorden are: