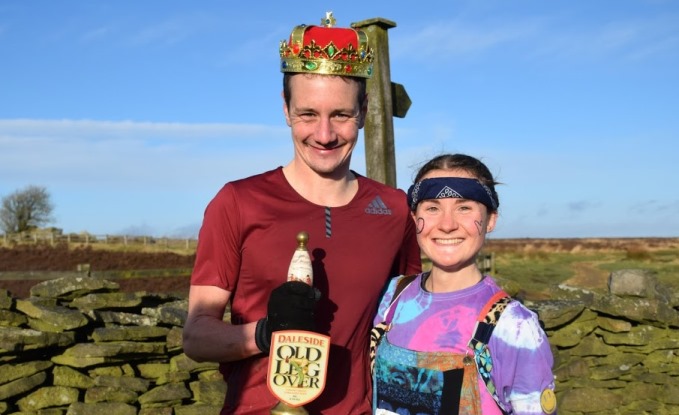 Sunday morning on Penistone Hill near Haworth brought out nine of the hardiest Todmorden Harriers to take part in the Auld Lang Syne Fell Race, organised for over 30 years by Dave and Eilleen Woodhead. This was a particularly special event, being the last race to be organised by the famous Woodentops. The weather was the usual mix of cold, wet and windy with the runners facing a strong headwind all the way up to Top Withins. The race was won by Olympian Alistair Brownlee, claiming his fifth title in 44.54. First home for Todmorden was Graeme Brown. He claimed 15th place in 48.11. First female home for Todmorden was Annie Roberts (photo courtesy of Woodentops). She completed a fine year’s running to finish 7th female and 58th overall in 53.24 – all this while sporting hippy style fancy dress. The first woman home was Nicola Jackson of Ribble Valley in 49.49. Martin Roberts completed the course carrying a body board, which he used to slide down the muddy slopes!