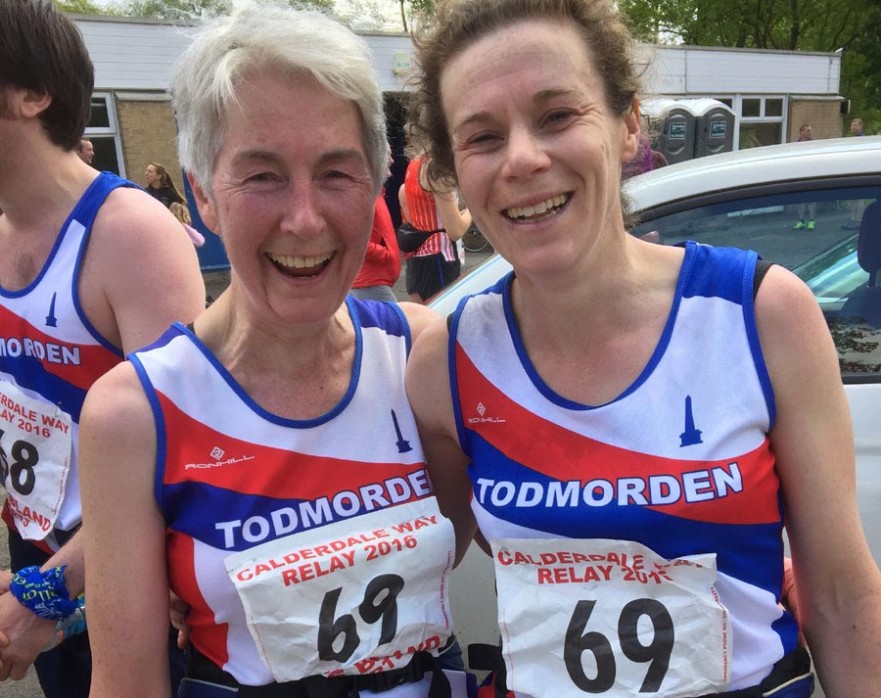 You spend ages asking for a race write up then 4 come at once!

Let’s kick off with Lucy Hobbs…

Pauline May and Gemma on Leg 1 gave the local ladies a fantastic lead which Kath Brierley and Sarah May held onto, while gaining places on Leg 2. The rest of the team worked together brilliantly and digging deep managed to secure a strong second podium position.

Team captain Lucy Hobbs was delighted with the win as it shows what a great all-round team effort can achieve. All in all a fantastic result for Todmorden Harriers, earning them the highest position ever achieved by a Todmorden’s ladies team in this relay.

In the veterans category Tod Harriers men triumphed winning the over 40 category and finishing 6th overall.

In at Number 2 is Matt Flanagan…

Hope I’m not too late for this update to the vets’ team report:

Robin Tuddenham and Ivan Gee on leg 1 gave Tod Harriers Vets a strong foundation to build on, and then the rest of the team proved what strength & consistency there is in this squad: Steve Pullan & Duane Dixon on 2, Matt Flanagan & Trevor Davies on 3, Paul Hobbs & Jon Wright on 4, Andy McFie & Ben Crowther on 5, Graeme Brown & Nick Barber on 6 all picked up places, coolly moving up the field to finish in a fantastic 6th place overall.

The fourth Harriers team, the Allstars, ended up with a very creditable result given the way in which runners had been pulled out to help with availability problems in the other three Harrier teams. The captain, Ben Beckwith and teammate Roger Howarth got off to a splintering start ending in 58th position – close to half way in the rankings – with 1.42 on the first leg. Mel Siddall and Louise Stunell lost a little ground on the 8 ½ mile leg 2. The mixed pair of Kasia Breskia, newcomer, and Peter Erhardt, seasoned runner struggled on the long uphill section at the start of the leg. Overall the pair achieved just over the hour for the short 4.8 mile leg. Richard Blakely and Christine Preston covered the 9.4 miles to Wainstalls Road losing just a little further ground to competitors and handed over to Selina Keaton, another newcomer to the CWR and Fiona Armer for the route to Shelf with easier running over the fields and lanes. The ladies pair held together well and pulled back time for the team in just 1.20 – an excellent time. The sixth leg was run by Kevin Coughlan and David Leslie in a dependable 1.41 for the 10.5 mile anchor leg pulling back a good few places for the team which ended up a creditable 74th of the 102 teams to finish.

Todmorden Harriers Mens Vet 40’s displayed speed, strength and depth during Sundays Calderdale Way relay. The 50 mile event made up 6 legs is the biggest off road relay in the UK and attracts some the finest talents in fell running. Just 24 hours earlier the MV40 team of 12 were faced with last minute substitutions, however they still confidently took the MV40 prize during the event and finished 6th overall in 6:31:31. This shows repeated strong form the Golden Horde of veterans who’s success continues to grow after recent team success in the Red Rose XC and in the British Fell reading championships.
The men’s open team Captained by Michael Harper finished in a respectable position of 31st in 7:25:29, despite being affected by substitutions. The mixed team finished in 74th out of 102 in 9:06:00