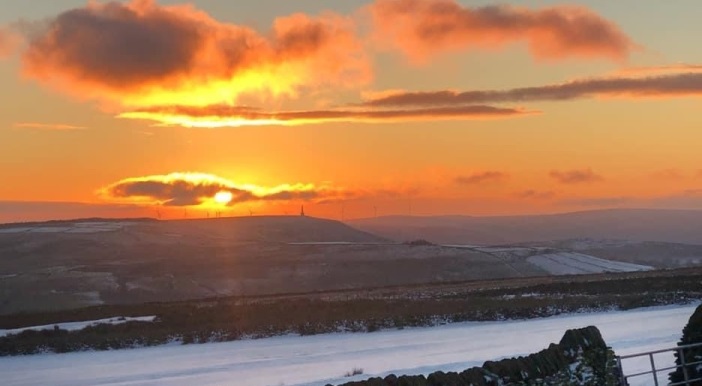 The new year, new lockdown doesn’t stop the Toddies from running on a Wednesday and the wintery conditions this week proved irresistible to the hardy Toddy!

First up (as usual) well before dawn Louise Greenwood and dog Kim up in the lakes sticking to the lower slopes due to the ice. Kim Ashworth showed Lisa Miles around the Holder Stones, equipped with a hammer to break the ice, Kim took a dip in Gaddings while she was there! Andy McFie ran around Blackshaw head bagging a great wintery photo of Stoodley Pike. Simon Anderton was “buzzin” after his hill reps in the sunshine. Kerry Edwards took her lunchbreak on the hills while Nick Barber put screws into his shoes to run on the ice! Matt Annison took an ‘on-me-tod’ solo run around Ragley while Heather Rostron buddied-up with Lisa Peatfield, Joolz Graham ran over the moors at sunset to deliver Torriers around Old Town and got a great sunset photo of Stoodley Pike. Dan Taylor didn’t get to run, having cycled home from work he did a core workout (presumably to warm up eh Dan?) Mandy Goth went for a 9k run with Katy May, and Jackie Scarf teamed with Christine Preston on Blackstone edge. Claire Di Murro and Pete started their running year with a short run, Fiona Armer also kept it short but worthwhile. Stu Wolstenholme with a slight injury went for a Dog Jog with daughter Sammy along the canal. Sue Roberts ran in St Ives (the Bingley one) and snapped another great sunset photo on the Nab while Paul Brannigan took his first run since Christmas on the roads around pole hill and Great Rock noting a zillion bright stars. Several Toddies decided to get stoned. That is to say that they were “stone bagging” for the Interesting Old Stones of The Central South Pennines Challenge (search IOSOSPC on Facebook for details of this). Dave and Helen Wilson went to Cuckoo Stone, Michelle Fuller was at Eagles Crag and Dave Collins visited the Bridestones. Rosie Holdsworth and Celia Way were stone bagging together. Anthony DeHeveningham was added 3 local stones to his tally.