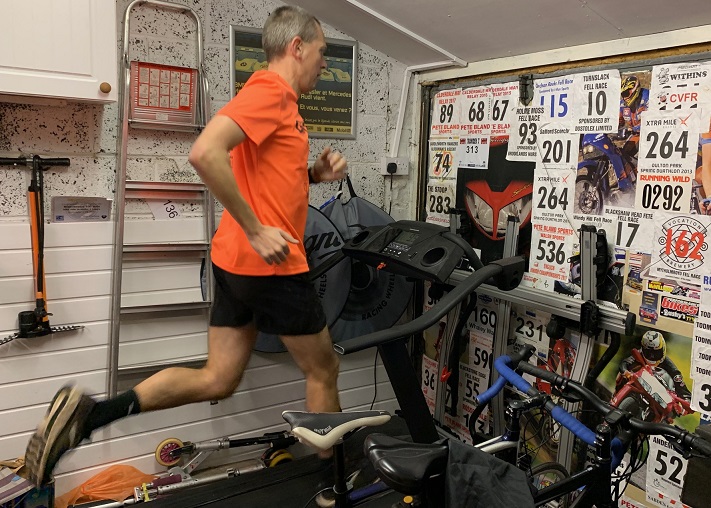 It was very cold and very wet for any on-yer-Tod runners who ventured out this No-Packrun Wednesday. Sally Chesworth was up first thing braving a frosty loop past High Brown Knoll. Sarah Dunnakey took a quick lunchtime jaunt to Foster Stone. Mandy Goth went on a ‘billy-no-mates’ run along the canal for 5k. Sue Roberts took a moorland run of 13k in aid of the dogs trust. Suzanne Copley took the dogs out before tea while Sarah Farnell worked up her teatime appetite with 4 miles up Cragg Vale. Taking it easy on the canal and cyclepath at Mytholmroyd, Mary Mahon reported that it felt good to be running again. Dave Collins did 4 miles around the same area. Dan Taylor ran home from work in 50 minutes and Alison Edge’s short loop in the rain proved to be the perfect de-stress run. Helen Wilson ran with Skye on her first longer run, 8 miles marking the start of Skye’s half marathon training. Heather Rostron and Lisa Peatfield ran 6 miles around Tod. Branny’s ‘inner runner’ within him made an appearance allowing his previously leaden legs to carry him around a swift 5 mile loop. Darren Graham did 6 miles reporting the most effort he put into it was put into actually getting out of the door!
Several toddies didn’t make it out of the door including Lyn-Marie Waters who was injured so poured herself a glass of wine instead, Michell Fuller dyed her hair (not tod colours or racing stripes) Pete Rolls ate dime bars, Mr, Kipling cakes and hob-nobs – the fuel of champions! Fiona Armer had too many emails to deal with while Eddie Energie sorted his sock drawer and did some stoner stuff*
Taking the treadmill option of running indoors warm and dry, Katie Fairless did a fast 5k despite aching from the ‘to-the-max’ strength and conditioning session the night before. Matt Annison did a Zwift indoor cycle. Also avoiding the grim outdoors Stu Wolstenholme did 10k on the treadmill whilst reminiscing all the great races pasted to his garage door.

*if you’re not yet familiar with ‘stoning’ then check out the Interesting Old Stones challenge on Facebook set by tod harrier Phil Hodgson.