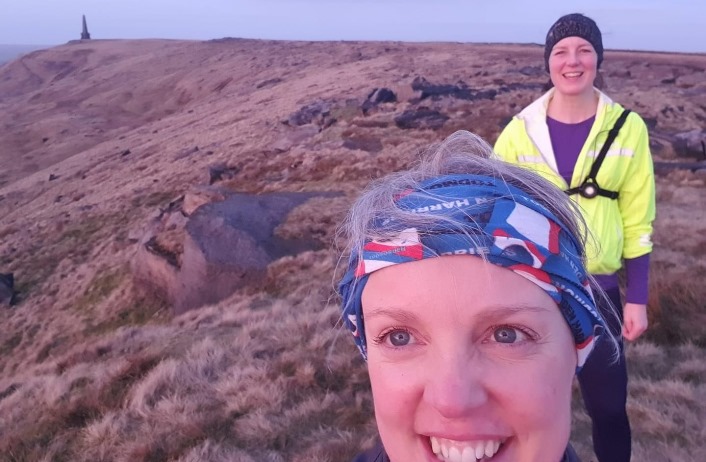 No-packrun day this week saw blue skies, sunshine and stunning sunsets being enjoyed by many Toddies. First into the great outdoors was Louise Greenwood who, having had a big day out the day before went for nice gentle 10k recovery run with Kim and treated us to some fine photos of the Lakes for us to contemplate for after lockdown. Back in the Calder Valley Andy Ford took on Stones Lane doing reps and dodging tractors. Dan Taylor was out for a few little bumbles in the sun looking for stones and taking it easy. Getting two runs in today Fiona Armer ran home after dropping her car then escaped up the hill after work. Also doubling up Helen Wilson ran home from the dentist, then went on a stoning stroll with David and Misty the dog taking in the last of the afternoon sun. A few Toddies crossed paths while running or reccying the Turnslack Fell virtual grand prix route. Sue Roberts buddied up with Jane and bumped into Dave, then Louise, then Phil Scarf on the way. Dom Leckie was also on a reccy but reported spending too much time taking pics and not enough time paying attention to where he was going (got a great sunset/wind turbine photo though!) Katy May and Rebecca Gibson enjoyed a thoroughly enjoyable 10k with beautiful views up through Callis Woods and down via Old Chamber. After work escapees this week included Susanne Copley, running up to Gorple, Jonothan Wright bagging Stoodley and back in the sunshine and Mandy grabbing a quick 5k. Also taking in the pike on their regular run were Heather and Lisa. Michelle Fuller and Dave Garner has a nine mile sunset run on Freeholds top with lots of mud and bogs while Josh Fenton-Glynn’s lockdown3/run#35 saw him take on a couple of hills on the road. Getting his virtual road grand prix under his belt Stu just about managed to get to the top as the sun set while Theresa Casey had a lovely moonlit stones run covering over 11km. On two wheels today Matt Annison was out on the mtb as he’s forgotten how to run hills! (Don’t worry Matt the toddies will be reminding you very soon!) Joolz Graham had an easy zoom around, singing on the bike and resting the legs after hill reps on Horsehold with Louise Abdy the day before. Taking a “top” 70km ride to Gisburn and back was Phil Hodgson while secretary Duncan had a quick blast along Widdop Road just getting home in time for school pick up time. Having a more dramatic day than usual two toddies fell victim to calamity: Nick Barber’s bike ride ended in A&E after crashing and leaving a head shaped dent in a wall. The incident has left Nick with a broken finger, bruises and scrapes (He also needs a good deal on a new helmet). Joining Nick in A&E was Andrew Bibby who has sustained a broken leg after being brought down by a slippery flag whilst out near Wainstalls. We wish both Andrew and Nick a speedy recovery.