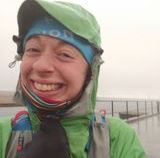 Storm Christophe tried but failed to dampen the Tod spirit; this “on-yer-Tod Wednesday” Lousie Greenwood and Dwane Dixon were again out before dawn for a run around Patterdale that was cut short when the floodwaters there reached thigh deep! This didn’t stop Dwayne from completing his Strava January challenge of climbing 2000ft. Dan Taylor got an early 3.5mile run before having to cycle to/from work due to the flooding. Kim Ashworth’s solo run in a raincloud netted her two Strava segment PR’s. Alison Edge was excited to be tackling torrential rain but her 5km loop of Walsden only yielded drizzle and she remained relatively dry. Heather Rostron and Lisa Peatfield’s bubble running continued with 4.5 miles around Walsden. Several toddies tackled the second race in our Virtual Road Grand Prix – the Border Dash. Mandy Goth got a Strava 10k PR but failed to keep up with Skye Wilson, Helen Wilson and Phil Hodgson also got their virtual GP entries in as well as a soaking. Anthony De Heveningham’s ‘soggy joggy’ run took him to the shop to stock up on essentials (wine and pizza!) bagging him a PR on the ‘Mytholmroyd express’ Strava segment. Dave Collins rode route 66 finishing at the Staff of life for a jog to eagle crag to get stoned* Also on two wheels Matt Annison has realised he has no need to venture outside again in the cold and wet now he has Zwift! Also indoors but back on two feet Stu Wolstenholme was struggling for inspiration on the treadmill until ACDC’s ‘Back in Black’ album came on the iPod! Meanwhile back in the great outdoors Sue Roberts’s run was wet and windy around Oxenhope with Jane. Paul Brannigan banished his work thoughts on a misty mountain hop of 5 miles while Michelle Fuller and Dave Garner stayed dry, warm and relaxed with a PJ Day. Also living the dream were Derek Donohue with a dawn raid on Tesco while Simon Anderton and Suzanne Copley put the bins out… better luck next week guys!
*don’t call the police – see last weeks report!