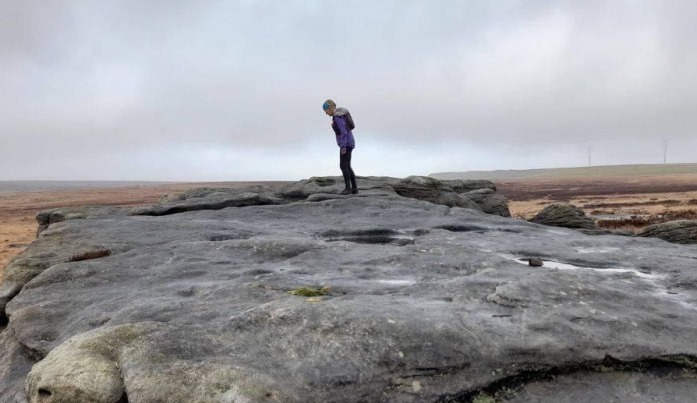 Lots of Toddies took advantage of the break in the weather to get out and enjoy the mild, dry conditions. Louise Greenwood kicked off the day’s running early, in the dark around Glenridding but finally saw daylight on the way home and a sniper in a tree*
Two lasses (Kim Ashworth and Francesca Louise) went up to Two Lads. Antony De Heveningham was feeling ‘Kimspired’ so also went to Two Lads albeit a bit too late in the day to get any good views. Sarah Dunnakey did a lunchtime circuit from Fly Flatts taking in a few stones inc Mist, Rocking Stone and Sinner Saved by Grace, it was treacherous underfoot at times with lumps of ice hiding underwater pretending to be rocks! Katy May was out with Mandy after a break from running reporting that it was great to be out for her first outdoor run in weeks. Julie Graham’s ‘turfing and stoning’ walk with Dazz involved modelling ‘CraggRunner’ apparel in her role as Dazz’s fashion model. James Riley, was also out earlier in the day. Taking advantage of the almost spring like weather he said “Lovely to be out in t-shirt and shorts for a change, rather than looking like the poster boy for the next expedition to K2, as has been the case for the past six weeks or so”. Simon Anderton had a jog and a wee behind some garages (too much info Simon); Lyn-Marie Waters had to finish a Uni assignment so no run for her tonight. Also not making it out Allison Edge had planned to do the border dash, but after shutting her hand in a fridge door adding to an existing injury she decided to stay in (this is why she wears Mr Bump leggings!) Meanwhile Jonothan Wright’s trot around the moors in the dark was interrupted by a mountain rescue callout very nearby (with a happy ending – phew!) Joshua Fenton-Glynn’s run saw his 14th lockdown run cover 18k around Hardcastle Craggs. Heather Rostron took in Shaw Wood Rd, Harvelin Park and Lumbutts Rd for her 7 miler with Lisa Peatfield. Dave Collins cycled to Combe Hill Cross to finish the stones challenge whilst enjoying the nice cycling weather. Fiona Armer got out at dusk for a solo 10k road run around the block in the hazy moonlight whilst serenaded by a noisy owl, nice. Matt Annison managed a 3 miler to check his legs were still working after all his recent Zwifting! It was ideal conditions for anyone to complete the second virtual road grand prix race – the Border Dash. Paul Brannigan Border dashed with Stu Wolstenholme in a beautifully controlled run with only a minute separating them at the finish (48.24 for Stu) There was encouragement too from an unknown driver and 2 or 3 other runners, including new Toddie Paul Michael clocking 56m 55s and Peter Kerridge the fastest on the night with 46m 42s.
*see forum