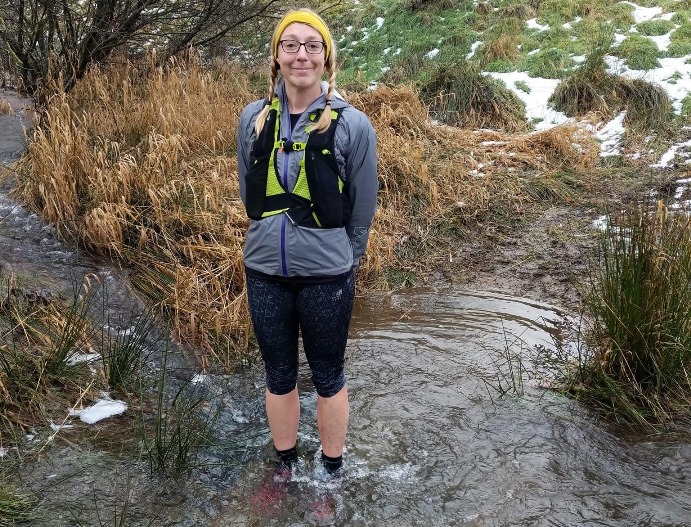 After Tuesday’s spectacular snowfall, slush, slush and more slush tested the resolve of the hardy Toddy this no-Packrun day.

The first to dip a toe in to the icy water was Louise Greenwood, tracking badgers and foxes in the dark running around the shore of Ullswater. Andy Ford’s planned easy run to Gorple Res. turned in to a 9.6k slush and fallen tree fest. Nick Barber went hill repping up Winters way for a slow, slushy 16k. Kim Ashworth and Francesca Louise’s 4 miles of slushy road recovery running left them wondering whether they were on the path or in a stream? Andy Worster couldn’t face another slushy run and wisely found himself a well gritted road for some hill reps. Overcoming an initial lack of willpower to wallow in the slush Darren Gilman had a splosh down the canal towpath. It wasn’t fun but he clocked 8k before dusk. Katie Samuelson reported a horrendous dirty slushy 5 mile trudge. She wouldn’t have bothered but it was her commute, preferable to staying at work and she bagged a Strava Local Legend segment in the process. Lisa Miles’ run was along what seemed like a Toboggan track up Allescholes. Simon Anderton had a Fartlek session in the grey snow. One of the few to venture onto the fells this week Sue Roberts ran 6 miles up the incredibly slushy, sloppy ‘n boggy Stoop route! Back on tarmac Joolz Graham recced the Danny Lane climb of the Royd Roller route with Louise, they were left feeling a little daunted by the prospect of the full race although Joolz earned a couple of Strava trophies in the process. Meanwhile Dazz Graham prepared his new trainers ready for next week’s return to running (were expecting big things next week Dazz!) Jonothon Wright spent several miles slipping & sliding in the slush but his return along the canal was a bit easier going. Short and steady running in the evening drizzle was the order of the day for Kerry Edwards while Heather Rostron and Lisa Peatfield took an 8 mile loop over Lumbutts Road. Katy May ran out to Mytholmroyd and back via a bracing slushy Wood Top, in the dark whist chasing Mandy Goth. It was a 3 mile slush fest for Helen Wilson’s run assisted by some old fell shoes, also keeping it short Kate Velveteen got out for a little run around Old Town, it was horrendous! Pete Rolls successfully eased a touch of sciatica with 6 miles at Ponden Water while Matt Keyes’s ‘Slush puppy’ 11k run give him two Strava PR’s and introduced us to a new Tod harriers dog. Toddies who stayed warm and dry inside this week include Secretary Duncan running the dreadmill for 6k, Stu Wolstenholme sweated it out for 10k on the treadmill while Paul Brannigan avoided the slush by doing his pack run the day before. Matt Annison was going to ‘Zwift’ but instead drank some beer – Cheers!