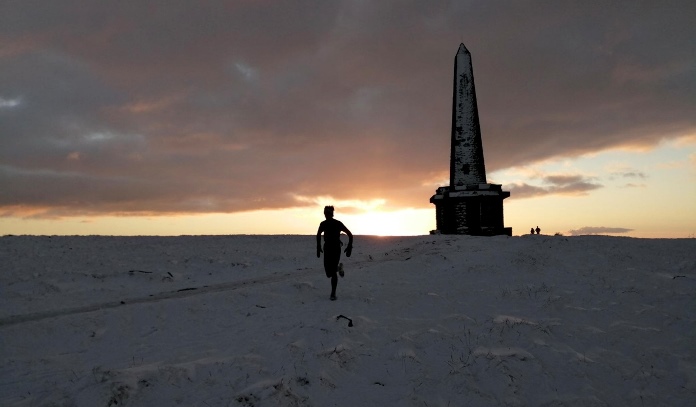 This week’s no-packrun was a super cold affair with plenty of ice and snow. First to venture out (surprisingly late at 7.20am and running in daylight for a change) Louise Greenwood reported significantly less snow in the Lakes compared to the Calder Valley; she skated up to Silver Point on ice so thick that even spikes couldn’t get a grip on it! Helen Wilson had a lovely 5 miler in glorious morning sunshine while Mandy Goth covered almost 12k in very snowy conditions over High Brown Knoll, also heading to HBK was Lucy Hobbs with Paul and dog, Benji. Kim Ashworth found a unicorn (sort of) on her 11.5k run as Darren Gillman headed out with full winter pack & spikes, he got as far as Gaddings before turning an ankle… on the only bit without any ice or snow! then hobbled back home. Speedy recovery Darren! Charles Colbourn took a cautious bimble round Midgley Moor wearing microspikes and wearing enough layers for a polar expedition! Also bimbling was Claire di Murro running to Lumbutts. Sophie Cunningham tried to find a spot for intervals with Andy Ford in the park, they found 100m of path with no ice and used that for some reps. Dan Taylor had another run home from work to avoid the ice. Eddie Energie was waist deep in places on the way to Little Holder Stones. Andrew Dyson ran a few miles above Pecket Well in the afternoon, his first run since an unplanned canal bank half marathon (his first sub 2 hours at 1 hr 56 min 10 secs – Kudos to Andy).
Susanne Copley took a jog completing wk2 run of C25k, report a very boring road run through Walsden. Simon Anderton had a most chilly outing over Kebs on his bike while Julie Graham recce’d some more bits of the Royd Roller with Louise Abdy. Emma Fiedler had a Gaddings adventure which included snow drifts, frozen reservoir and beautiful ice garden.
Graeme Brown took a golden hour escape to the Pike with Nick Barber. Graeme asked Nick to freeze for a photo, minutes later they were in a blizzard and they were frozen! Mel Blackhurst reported a deserted Pike and Skyline in the late afternoon-beautiful but baltic! James Riley spotted and photo’d a ‘super cell’ dumping loads of snow while Fiona Armer confessed to just enjoying the views from her nice warm lounge.
Mel Whitmore took a rare homeland run in snowy, sunny (and baltic!) Helensburgh. Chris Preston’s very snowy ‘run’ above Oxenhope had her giggling at the daft idiots who thought they could drive over Fly Flats Road. Whilst I’m emailing, you can add me to the list of those enjoying the sun and snow today. The only stud marks on the summit of Flower Scar today belonged to Dave O’neill who’s run was interrupted by helping to rescue a car from the ungritted road that goes down to Portsmouth. The driver had decided to go over the tops to avoid the roadwork traffic lights in Tod. Idiot (driver – not Dave!) Kerry Edward’s short run after work had a stunning view of the mostly frozen Hollingworth lake. Dom Leckie Spotted an Eagle (cragg, that is), Heather Rostron and Lisa Peatfield ran a steady 6 miles round Tod, passing through the park. It was too cold to stop for a photo. Pete John ran 9 miles on Ilkley Moor with some classic 90s Britpop. Wishing she’d gone on skis instead, Sarah Dunnakey ran the Mytholmroyd fell race route. Late into the evening Stu Wolstenholme took a dark and snowy dog jog around Norland Moor…he has yet to warm up.