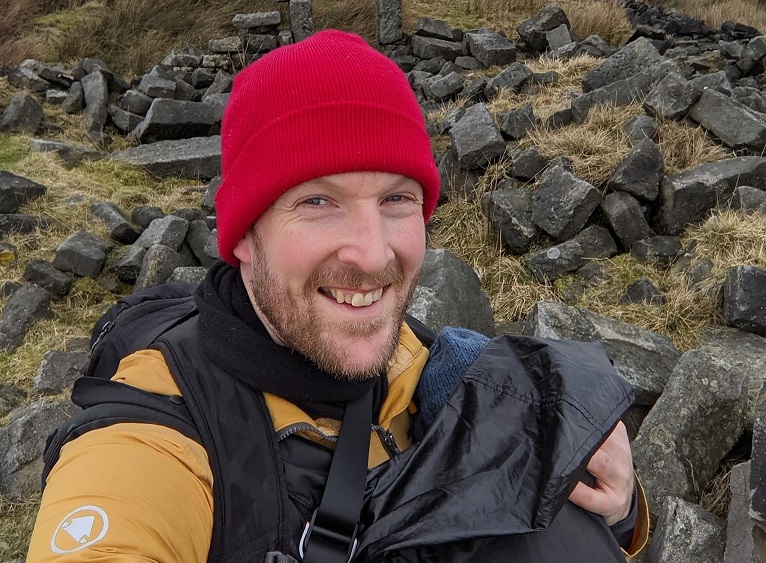 With the sun shining and a spring-like 9 degrees outside, the baltic conditions of last week’s no-Packrun seemed like a distant memory. This tempted numerous members out on-their-tod for the customary non-packrun. The snow had almost gone up in the lakes but Louise Greenwood couldn’t face going out in the dark (still raining up there!) so she did a HIIT workout until it got light, then dragged reluctant dog Kim out for what would have been a fast 5k if she didn’t insist on multiple sniffing episodes! Kerry Edwards was out for a steady 6 mile loop followed by a cheeky ice cream. Kim Ashworth was persuaded by Andy to do 20 x 30second speed reps while Antony De Heveningham took young Benjamin for a tour of some local DOF’s*. Also doffing, Christine Preston was at Cock hill but it’s unclear whether she resisted the temptations of the ice cream van that was parked there.
On two wheels Matthew Annison took the family for an awesome family mtb ride round the valley for 15 miles and 1700ft, spotting a dof or 3! Nick Barber clocked 30 miles on his bike while Simon Anderton enjoyed a great ride over Kebs.
Back on two feet, Alison Edge took the kids for a walk at Gaddings reporting that the weather was still baltic up there almost blowing them over! Jonothan Wright got an after-work run in daylight and Helen Wilson took her first race attempt at Bridestones Fell Race route experiencing more mud, less ice and snow. What a difference a few degrees make! David Wilson went ‘stoning’ on Blackstone Edge bagging Aiggin Stone, Letter Stones and Robin Hood’s Bed. Lyn-Marie Waters had solo 5k run around Tod making the most of the lighter evening…until it rained. A run to Gibson Mill and back marked Mark Wisbey’s first run out in around 3 months whiles Fiona Armer’s Solo road run round the block took in the sights of Old Town, Pecket, Hebden, Mytholmroyd, Midgley and back to Old Town along Heights Rd taking 11.8km in 79mins on this hilly route. Since turning his ankle last week Darren Gilman was still unable to run but he had a wander around Widdop ticking off an old stone from his list. Stu Wolstenholme, still sore from his 50k for 50 years birthday challenged managed a short jog pulled along by Grohl the dog. Creaking and aching his way around a virtual GP short race was Paul Brannigan, a race that’s due later in the year. Dave Collins did Bill Johnson’s lockdown score event of 20k taking in either side of cragg road with plenty of tussocks, but nice paths as well. Dave recuperated from his efforts with a couple of bottles of Saltaire Cascade. Other Toddies upholding the unofficial Harriers motto of ‘drinkers with a running problem’ were Mel Whitmore drinking cider, Dave Garner, something brown, Laura Donald, wine and Mandy Goth on the Gin. Cheers!