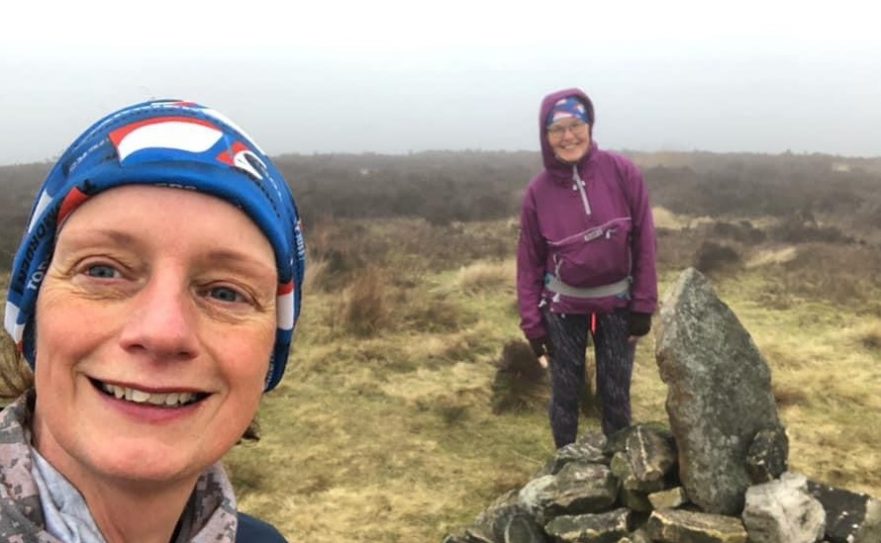 This week’s no-packrun Wednesday was a foggy affair for most Toddies who ventured out. Sarah Dunnakey had a misty murky run up to High Brown Knoll before breakfast with early morning frost still doing its decorative thing up there. Off work, so going out for a road run was Susanne Copley, whilst up in the lakes Louise Greenwood reported autumn-like conditions in the valley and freezing cold. But a climb up to the Ruthwaite Hut below Grisedale Tarn got her above the clouds and into the sunshine! Back in Calderdale Julie Graham took a lovely recovery bimble with Louise Abdy on Midgley Moor while contemplating hill rep/sick bucket tactics for the next GP road race. Later in the day the canal was the route of choice with Dan Taylor running home from work as nothing to see. Also there, dodging the aggressive geese was Sophie Cunningham on a recovery run after some hill reps the day previously and warming up on the canal was Jonothan Wright before heading up to Withens Gate and back through the murk and on towards the Shepherds managing to get down without switching on the headtorch. Dave Collins trotted around Wood Hey, over Erringdon Moor, down Spring Wood to Hoo Hole. It was still light at 6:00pm – just. Kim Ashworth’s run saw her witnessing another classic Bridestones sunset while Kerry Edwards had a wildly exciting 2 mile pootle on the treadmill (that may be sarcasm from Kerry). We wish Kerry an continued speedy recovery from injury and hope to see you outside soon! Mandy Goth did several ‘billy-no-mates’ circuits of Calder homes park after work. Heather and Lisa’s regular bubble run this week was a sound 6 miler over Lumbutts Rd. Dave Garner was going to tackle 2 trigs but after Cowpe Low the freezing cold wind came in so he skipped Top of Leach and ran home. Avoiding the tops, Ben Beckwith had a nice trot through Hardcastle Crags and Helen Wilson took a short road run with Skye. Katy May seemed to surprise herself with slightly further than expected 12k. Paul Brannigan was out on a loop of Pole hill reporting very low visibility, the kind that creates a gorgeous sense of isolation and the feeling that at any time some crazy person could come at you with an axe. Dave Garner did nothing to calm Paul’s fears (see photo on the forum). Claire Shaw took a hilly 8k batrun to Blackshaw head. Also running in the pitch dark around North Dean woods were Stu and dog Grohl. In the all-enveloping darkness there was wildlife rustling around, unusually for Grohl he wasn’t keen to check it out! Was it the crazy axe wielding madman again? We’ll never know.