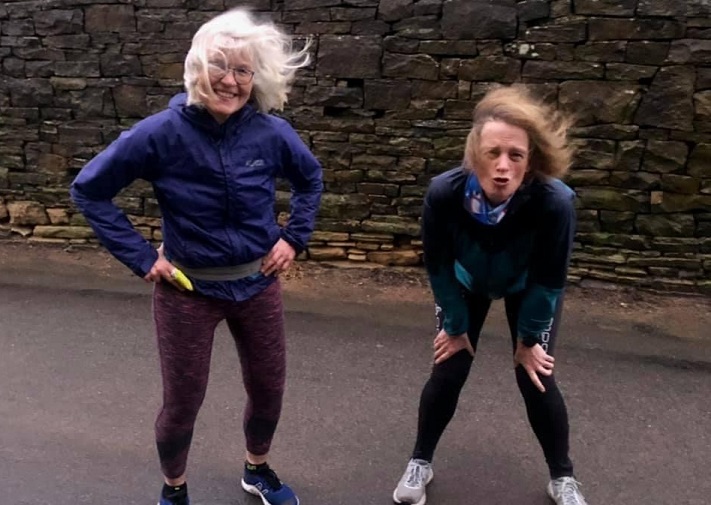 The incoming gale thwarted the efforts of many this week, but several Toddies beat or braved the weather. Sophie Cunningham was the first out doing reps around Centre Vale park. Proving that there’s a first time for everything Louise Greenwood did her first ever treadmill run. Yes – you read that right, Louise did not go outside for a run today!! Also on the Treadmill avoiding the rain was Lou Geldart and secretary Duncan who clocked 9km in 46mins, while Nick Barber did a Zwift session.
Toddies with altitude ambition today included Dan Taylor who plotted to run up to a misty, murky looking Stoodley Pike as many times as possible eventually managing 8 reps, 7 miles and 4300ft of ascent. Joolz Graham and Louise Abdy were preparing for the next road virtual grand prix race with their first hill reps session completing 222 meters of climb while the wind blew a hooly, fortunately no sick buckets were needed this week. Also ascending to great heights Pauline May did the ‘the climb’ road VGP race and caught the full force of the gale experiencing headwinds, side winds and tail winds. The road was a river at times, so much so that she spotted a pair of ducks swimming in the road at one point! Tackling the same course was Chris Goddard in a time of 25.14.
Back down in the valley Helen Wilson took a short puppy-in-training run along the canal. Josh Fenton-Glynn did his lockdown 3 run number 34 covering a windy 18k while Peter Kerridge’s Wednesday 10k was reported to be a struggle! Heather and Lisa ran off their frustrations over the course of 5 miles. Rebecca Gibson and Katy May braved the gale to run 10k while Stu Wolstenholme timed his run to dodge the worst of the rain with an evening 9km loop. It was a fast run out with a tailwind but he was blown almost to a standstill on the flat return along the canal!