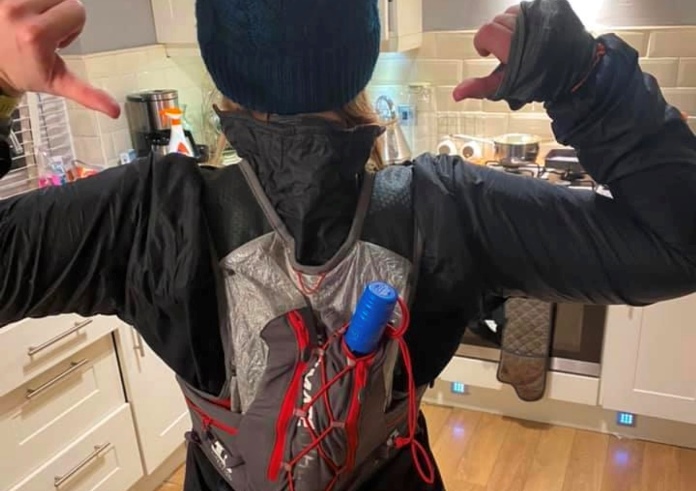 Week three of On-Yer-Tod no-Packrun saw plenty of Toddies out enjoying the crisp, dry November days. First up (as always!) were the ‘Toddies-in-exile’ pair Louise Greenwood and Dwane Dixon running around Patterdale and Glenridding in the dark. Joolz Graham’s ‘morning headspace’ run was filled with tales of old ladies sticking fingers in melons! Mark Williams did a breakfast lap of Huddersfield. Getting out for some early loops of Horsehold Mark Rochester was another early starter. With determination to get out today Claire Shaw zipped down the valley and back. Katy May dragged Mandy Goth up the hill to Midgley (a great way to warm up) bagging Mandy some PBs en route. Ambi Swindells did a buggy run around tod but returned home with a toddler that had only one shoe (keep your eye out for that Toddies!) Myra Wells ran home from dropping off a troublesome car at the garage while Ivan Gee took short blast around Gaddings. Kerry Edwards did a short steady run on day 68 of her running streak – go Kerry! Katie Fairless took a steady plod to Walsden and discovered a new use for a hydration pack when she stopped off to pick up a treat (see photo). Alison Edge took a run around Tod’s new Christmas lights. Stu Wolstenholme continued his coaching of daughter Sammy, who got a new longest run of 9km. A sore leg slowed Heather Rostron’s comeback this week but a walk with Lisa Peatfield kept them both moving. Michelle Fuller went ‘Wardleing’ (citation needed) to Watergrove. Multiple time Local legend Daz Graham added the Magson House road climb section to his status on a pacey 16.5k run. Upping the pace further still was Nick Barber on his speedy 11.8kms. In proper on-yer-tod style Matt Annison took a solo run to Egypt and back under 7k (you’d think it’d be further?) Peter Kerridge was out at dinnertime collecting 3 trigs over on the “dark-side” Also using dinnertime wisely was Ricky Parrish with a swift 6.7k of local trails. Checking out Stoodley Pike late in the day was Tristan Langlois who then got to see dusk settle over Erringden Grange. Duncan Ritchie and Roger Howarth continued their Trig challenge by adding Stoodley Pike and Little Holder Stones to their tally whilst staggering through heather, bog and fog. Dave Collins was thinking bigger than trigs and took to two wheels for a ride into deepest Lancashire discovering a stone monolith from the 9th century. Also on two wheels, a tired Dan Taylor rode home from work; he’d peaked early having run Pendle and Sheep hill earlier in the week. Andrew Dyson tested his new headtorch on the muddy moors to High Brown Knoll. Darren Gilman earned his beer and curry with a Pennine way wander. Back on the road, 10k early in the day was not enough for Andy Worster so he went back out for 7k of hill reps! Robert Gray went flat but fast for his 5k. Down on the local canals Joe Courtney ran 5k while Katie Samuelson bagged more Strava PR’s over her 12.5k. No luck in the running department for Suzanne Copley again this week, but she did get an enormous Christmas tree!