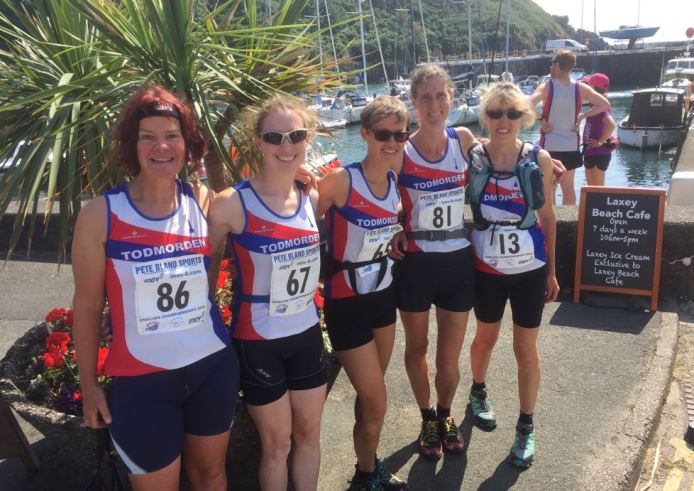 The fourth race in the English Fell Running Championships took place last weekend on the Isle of Man. The Kate Burge Sea-to-Summit race is a mostly uphill 14km race with 1200 metres of ascent; the race commemorates a local athlete and former GB triathlete who was tragically killed whilst out cycling home on the Island; she preferred running up to down and hence the summit finish. On a beautiful blue sky day, the race started on Laxey promenade with all competitors touching the sea before setting off. After a steep road climb through Laxey the route heads onto the fells to hit the summit of Sileau Ouyr. It then undulates a little to the summits of Clag Ouyr and Mullagh Ouyr before crossing the footbridge over the Isle of Man TT course at Bungalow to reach the last climb to the summit of Snaefell at 621 metres. The return to Laxey was provided courtesy of a Victorian tram, constructed in 1895 and a unique return to the start. In the women’s race, there were 69 competitors with Rebecca Patrick first home for Todmorden Harriers in 19th position (1.52). Pauline May was close behind in 24th (1.56). The Women’s V40 team had another good outing with Kate Mansell coming home in 28th (1.58) followed closely by Mel Blackhurst (1.59); Mel was also 3rd V50. Sue Roberts was the 3rd 55+ women to complete the race in 2.46. The men’s field extended to 201 runners; Andy Worster had a great run to finish 9th (1.20). Graeme Brown was next home in 1.29 followed by Dwane Dixon (69th – 1.41), Stuart Wolstenholme (137th – 2.02) and Martin Roberts (176th – 2.19). The post-race ‘Fell-Fest’ on Laxey seafront, which included local bands, a local brewery and food rounded off an excellent day for the Harriers.