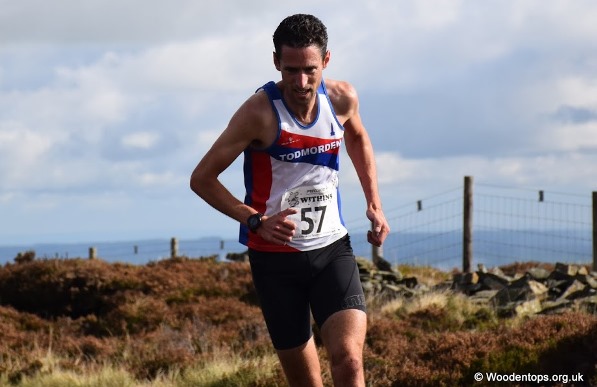 The Withins Skyline brought out the best from Todmorden’s runners following the worst of the weather at the weekend. The 6.5m course begins and ends at Penistone Hill, taking runners around the fells of the famous Haworth moors. The rain of previous days meant that there was significant mud to contend with underfoot, but the spirits of the Harriers were not dampened. Andrew Worster continued his current run of form with a fantastic 5th place on Sunday. He led the Harriers home in a time of 46.18, just ahead of 6th placed team mate Graeme Brown (pictured) who finished the gruelling mudfest as first V40 in 46.59. Chris Goddard completed Todmorden’s top three with a 26th place finish. He crossed the line in 49.59. Annie Roberts continued her amazing form by finishing 5th woman and 36th place overall in 51.11. Rebecca Patrick followed in 11th (80th overall) in 55.36, then Kate Mansell in 197th in 64.14. Race winners were Harry Holmes of Pudsey & Bramley in 42.40, and Emma Clayton of Leeds City in 49.01.