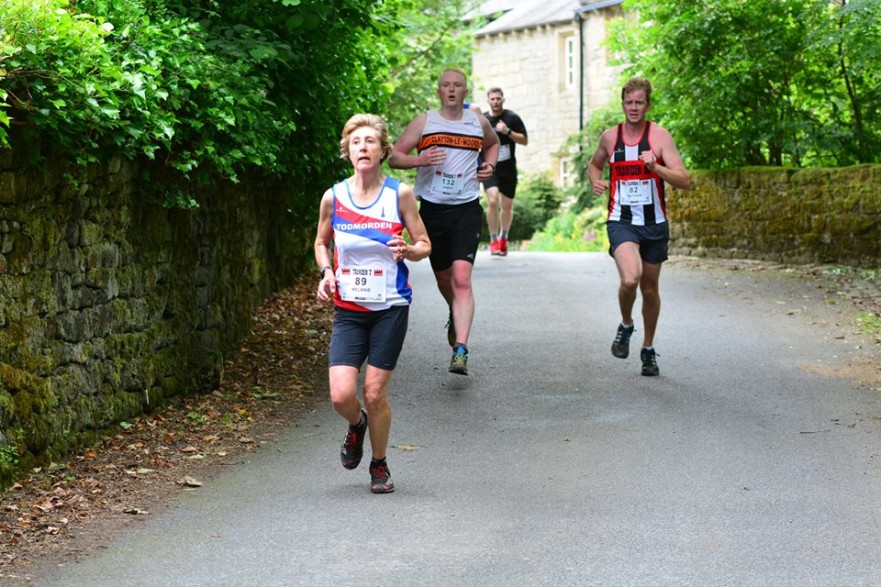 Eight Tod Harriers raced the Trawden 7 Trail on Sunday, as part of the club’s Trail Championship, as well as the Pendle & Burnley Grand Prix. A fast lap of the main field stretched the runners out before hitting the road…and as the imposing Boulsworth Hill looked down on proceedings fell purists were already cursing the high quota of tarmac, while road runners were wondering why they had gone with trail shoes. By mile 3 most of the climbing was out of the way, and runners enjoyed an undulating section along the Bronte and Pendle Ways, before a super-fast dash down to Wycoller, ending with a gruelling mile or so of tarmac back to the finish.

Andy Worster was first Toddie home in 14th place in a time of 45:05, a great effort after the previous day’s 3rd place at Heptonstall, but kudos goes to Mel Blackhurst (pictured, photo by David Belshaw), who won the FV50 prize, in a time of 53:42. Race winners were Tom Corrigan of Barlick in 41:17, and Louisa Powell-Smith of Ribble Valley in 46:52.

Coming back from injury, Duncan Cannon leapfrogs Dan Taylor to lead the trail champs table, with 2 races to go…next up Norland Moor. Matt Flanagan has now completed 5 of the requisite 9 to qualify for the Pendle & Burnley Grand Prix.