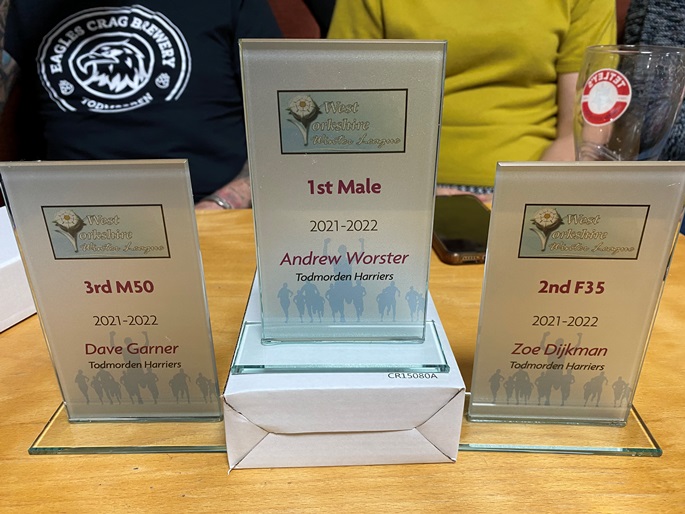 The West Yorkshire Winter League returned in November 2021 with an expanded season of 8 races. A must for mud enthusiasts and speed demons alike the races are not like traditional cross-country courses (laps around playing fields etc) and more like trail races through woods, fields and moor usually with a decent amount of climbing in there too making these feel a lot like mini-fell races. With an average turnout of 500 runners the atmosphere on race day is electric! As you’d expect with a winter series the weather played its part. There was a memorably windy start to the season at Baildon. The Queensbury race lacked its traditional blizzard but was a contender for the muddiest race of the season and storm Franklin made for some challenging conditions at the Stadium runners race around the grounds of Storthes Hall.

There are 16 running clubs involved with the league, some of the clubs have a massive turnout, with teams numbering 80+ and 30-40 runners attending each race making them difficult to beat in the team standings. This years winning team was Baildon followed by runners up, Queensbury and Pudsey. The much smaller but mighty band of Tod Harriers finished in 14th overall but fared well in the individual standings. Andy Worster won races at Northowram, Stadium and Stainland on his way to take 1st overall for the second year. Running consistently well throughout the season to claim 2nd F35 was Zoe Dijkman and Dave Garner battled his way to 3rd place in the hotly contested M50 class.

Details of the 2022-23 season will be confirmed sometime in September – keep your eyes peeled for the announcement as the league’s season passes always sell out quickly and the entry fee of only £15 for all 8 races must surely represent the best value racing in the country!!