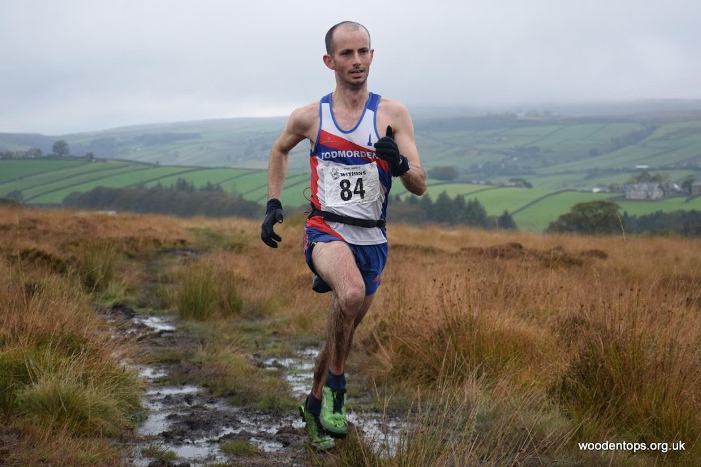 There was standing water aplenty after a week of heavy rain for the annual Withins Skyline fell face on Sunday. Todmorden Harriers featured the event in their Grand Prix – this brought a dozen seniors to the mud of Penistone Hill. Starting from the quarry bottom on Penistone, the route heads out along the track to Drop Farm. The path then narrows and drops toward the beck that feeds Leeshaw Reservoir. From there it then climbs up crossing several boggy plateau to reach the Stoop Standing Stone. Follow the path along the watershed, descending slightly then start to ascend again towards the summit of Dick Delf Hill, runners eventually meet the paved path of the Pennine Way which leads to the ruins of Top Withens. They then headed back to the Bronte Bridge to cross the beck and to make their soggy way back to the finish line at Penistone Cricket Club. This year’s race featured in the Todmorden Harriers Grand Prix. Andrew Worster claimed third place overall and the honour of being first home for Todmorden. Helen Hodgkinson was first lady home for Todmorden to finish 126th in 1.12.22. Peter Ehrhardt claimed first prize in the V70 category. He finished 167th in 1.29.49.