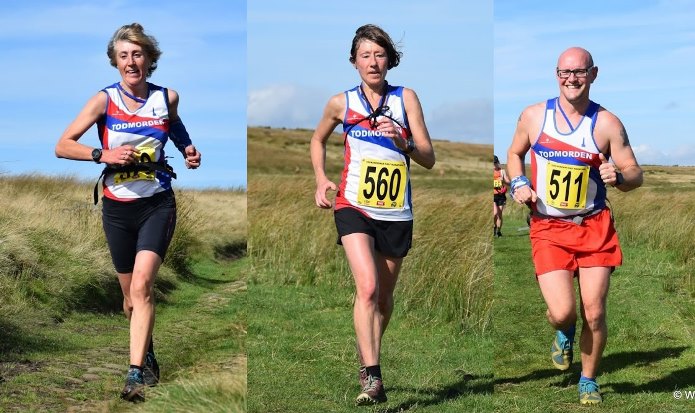 Yorkshireman Off Road Half Marathon, 11 September 2016
Report by Jo Daniels
Photos by woodentops.co.uk

The weather was glorious for those setting out on the Yorkshireman Off Road Half Marathon and Full Marathon on Sunday morning. The course takes runners from Haworth village on a circular tour of the local moorlands. Both courses run alongside each other taking runners over Penistone Hill and across the moors to the site of the old Withens pub, one of several checkpoints on the route named after buildings that are no longer there (Denholme Velvets is another extinct landmark). The route splits after the windmills overlooking Warley Moor (also known as Fly Flats) reservoir. Both the 26.2 Full marathon and 17 mile (a ‘large’ Half!) Half marathon finish back at Haworth.
Three Todmorden Harriers contested the Half Marathon as solo competitors. They were: