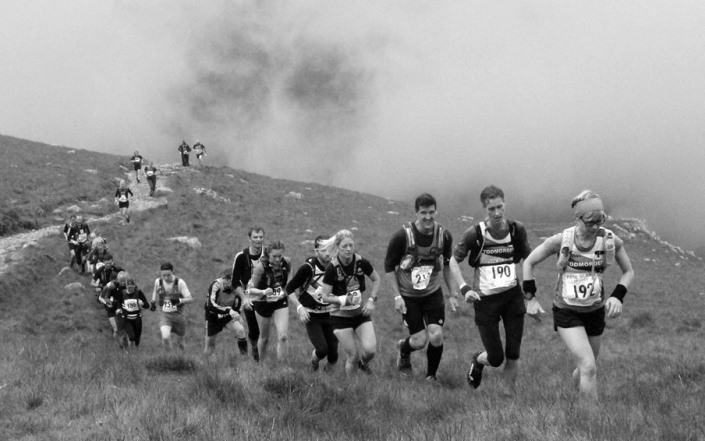 Packing in over 2000m of ascent in 21km, the Great Lakes Fell Race is reasonably described as ‘a monster’. As a long race counter for both the English and British Fell Championships this year, a stacked field of fell runners arrived in Landgale on Saturday in damp and claggy conditions. The raise starts with a long ascent up to Bowfell before making a high level circuit of Upper Eskdale. The wet conditions made for slippery rock hopping as runners made their way to Scafell Pike and Scafell as dark clouds rolled in overhead. Onward to summit Slight Side, route choices made some interesting lines as runners then climbed steadily across a grassy and boggy landscape to the summit of Pike of Blisco as the clouds began to break. A steep final descent took them back to the start. 309 runners finished and in the ladies race, Kelli Roberts of Helm Hill set a new course record in an impressive time of 3.03 Todmorden’s Annie Roberts continued her fine form to finish 7th in 3.37. Also showing her absolute class as a runner, particularly in the challenging Lakes races, Jane Leonard was the second Tod Harrier lady to finish in 4.56 (56th) and second V60. Just behind were the Tod trio of Mel Blackhurst, Kate Mansell and Rebecca Patrick (60th) who had a grand day out to eventually finish in 5.06. In the men’s race, Carl Bell of Keswick won in a superb 2.37. Andrew Worster finished 29th in 2.59 followed by Graeme Brown in 3.08 (55th). Just behind was Jon Wright in 3.20 (66th) with the V40 Team completed by a great run from Chris Goddard in 3.22 (68th) and Nick Barber in 3.56 (142nd). Close behind were Darren Tweed (4.04 -156th) and Duncan Ritchie (4.26 – 190th) followed by Dan Taylor (4.35 – 199th) and Bob Halstead (4.54 – 210th) who included an unexpected tour of the Wasdale valley.